Supreme egotism and utter seriousness are necessary for the greatest accomplishment, and these the Irish find hard to sustain; at some point, the instinct to see life in a comic light becomes irrestistible, and ambition falls before it. – William V. Shannon, quoted in Thomas Cahill’s How the Irish Saved Civilization 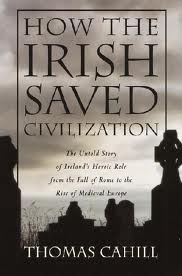 [Naturally I would turn to a history book (church history, no less) for my first summer beach read. I don’t know how this book escaped my attention when it topped the best seller list at the end of the preceding century. Even though I was a teenager at the time, I was pretty well attuned to religion-in-the-news. I would like it known that I read Newsweek – before Tina Brown et al destroyed it.]

Though I missed it the first time around, I am so glad that I got my hands on this book. (As a disclaimer, I should add that my mother’s family is of Irish ancestry, though I’m convinced that does not affect at all my affection for the Irish after reading this book).  It retells the story I know – the story I’ve taught! – through the eyes not of the victors (after the trauma of the Dark Ages I’m not sure we could call the Romans ‘victors’, though in their way they did prevail) but of the scholars, lovers, writers and saints of Irish Celtic culture.

Forget everything you know about St Patrick. Well, maybe not everything. But lets examine one tale we hear told: how he explained the Trinity with a shamrock. How cute. Generations of catechists have used the same imagery, and generations of students have used a smile to mask their utter incomprehension.

There’s no historical record of Patrick doing any such thing. I’m sure he happily promoted orthodoxy, but after reading this book I’m not so sure he was hung up on intellectual comprehension of theological concepts.  It seems more likely that he was genuinely pastoral, as a bishop should be, concerned for the spiritual and worldly well-being of people. He loved people. Is it any surprise that he would draw an entire isle to Christianity by the force of a loving soul?

Cahill also cites Daniel Patrick Moynihan’s assertion that to be Irish is to know that the world will eventually break your heart. But we can only have our hearts broken by the things that we love. Love of the world, of learning, of art, and of people is the thread that runs through this history of the Irish in the dark ages, and through the hearts of many Irish and non-Irish throughout history.

St Brigid hoped to offer “a great lake of beer for the King of Kings”, Hopkins observed “the world is charged with the grandeur of God”, Patrick saw “Christ in the heart of every man who thinks of me”. All of us who find God in all things are the spiritual beneficiaries of that inheritance.

We are not always the ones who make the history books, we lovers of God and of people. A poem survives here, an extraordinary act of generosity there, but overall the annals are filled with Constantines and Medici and Napoleons. The shrewd and the ambitious win the so-called spoils, and the rest of us are left with our poems and prayers on the sidelines of history.

How the Irish Saved Civilization demonstrates that those poems and prayers, rather than being the sidelines of history, are history itself.