The big story in Boston this week was that the national broadcast of the Fourth of July fireworks was manipulated to show landmarks that are nowhere near the Esplanade. I wouldn’t say that’s worth of tons of indignation – after all, they were just trying to spice up something that is better experienced live anyway – but I still think it’s pretty lame.

This year I watched the fireworks from a hill near my apartment, just a few miles from where they were set off. A crowd started gathering hours before, content to sit on the grass for a while at the end of one of our precious summer holidays. We half-watched other fireworks displays to the south, and half watched the people around us while we munched on Cheez-its and sipped seltzer.

When the main event finally got going everyone crowded to one end of the park so that our view wasn’t blocked by the large brick edifice on the corner. There were screaming kids and lots of people blocking the view. There were “oohs” and “aahs” and shouts of “USA!” and “Let’s go Bruins!”. You couldn’t really see and you couldn’t really hear. It was wonderful.

In the middle of all this, because I am overly contemplative and because I’d had wine with dinner, I gave some thought to why we were all there. I doubt many people were meditating on the Declaration of Independence.  Maybe all that we wanted to celebrate was that we all were there together – “by some chance, here we are, all on this earth”;  that we live in a country that despite all of its problems and occasional obnoxiousness, is still about as good as it gets; that we have all agreed to carve out time in the middle of the summer for leisure; that we could lie on blankets on a grassy hill, in one of the world’s most wonderful cities, above a silly mural of George Washington, and enjoy something loud and flashy and beautifully purposeless.

For all of you who couldn’t be there and who watched the broadcast, don’t believe for a second that the producers improved on reality. I hope you enjoyed it, for sure, but know that the chaotic, crowded truth was perfect because it was real. No matter how attractive it may be to manipulate what is, I’ll take the real any day. 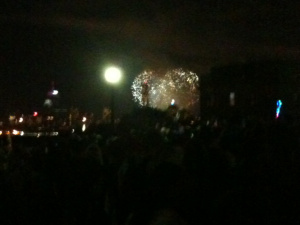