“The church’s role is to accompany those who suffer the most, and to witness our hope in the resurrection.” – Maura Clarke

On December 2 we remembered the four churchwomen killed on that date in El Salvador in 1980. Ita Ford, Maura Clarke, Dorothy Kazel, and Jean Donovan were raped and murdered by members of the Salvadoran military during the terrible period of oppressive violence that lasted in that country for more than a decade.

One news report commemorating the event mentioned that the killings of these women opened the world’s eyes to the atrocities being committed in El Salvador. It’s important that we look at the context in which this awful event occurred, and that there is plenty of blame to go around. Conversations I’ve had this week about these women often turned to a number of topics- the School of the Americas, Oscar Romero, US involvement in Latin American conflicts (with a healthy dose of my guiltiest pleasure: Reagan-bashing).

At what point do our saints stop being people and become symbols? Can we remember these women as individuals in their own right and as part of a grander narrative? I think there’s a tendency in hagiography (particularly when it comes to women) to miss the trees for the forest. We miss the particularity of their holiness by focusing on What The World Learned From Them.

“I hope you come to find that which gives life a deep meaning for you. Something worth living for–maybe even worth dying for.” -Ita Ford

If these women were merely victims caught up in the world-wide turmoil of the late Cold War, if this were only about the lingering effects of European colonization of the Americas, or the American support of oppressive regimes, or a civil war in which few were acting morally, we wouldn’t admire them. Through the memories of those who knew them and through their writings, we find evidence of an integrity that both put them in harm’s way and gave their lives purpose. They knew who they were and what they were called to do, and they didn’t let the world around them muddy the waters.

Integrity is the quality we need from our modern saints. To stand firm among the swirl of our complex world, to remember one’s mission while being bombarded by competing values, to keep the spark of divine love alive in our hearts while being told that we should fill our hearts with only ourselves, that is to be holy. We may think that we have something new going on here, but wasn’t Jesus also caught up in a complex political and social environment, and put to death for refusing to deny who he was?

The four churchwomen followed Jesus by not denying who they were, even though the path they were on led to martyrdom. Their conviction is admirable (or foolish, depending on how you look at it), and shouldn’t be ignored when examining the bigger conflict in which they were caught up. It’s a horror that simply living an honest life of service can lead to a brutal death. We do a disservice to the women’s memories if we focus only on the salaciousness and drama of their death and fail to notice the simple holiness of their lives.

We’re all sinners, everyone of us, and a radical change is needed for all of us. – Ita Ford 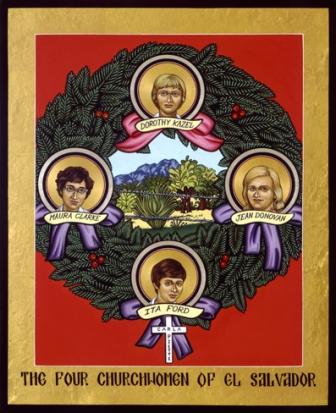