A few weeks ago I was preparing a thank you note to send to someone. I neatly wrote inside a card, placed the address label and stamp neatly on the front, and fastened the flap with a monogrammed sticker. I wanted this person to know that I was truly appreciated this, and thought indicating this with the care I gave to the note was appropriate. As I walked it over to the mailbox a familiar thought came to mind: trying to be nice takes effort.

For years I thought I was the only one who had to put in so much effort, mostly because I was an impulsive and opinionated young woman who wore her flaws closer to the surface than many others, and therefore I was told how terrible my personality was fairly often. As the years have gone by I have learned I am not awful, and that almost everyone has to put in effort to do the right thing, even if they don’t do the wrong thing quite as obviously as I tend to. 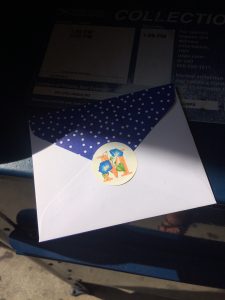 In the last few days Catholic media has been commenting on the online criticism – what many call attacks – toward some Catholic speakers and writers. Most attention has been focused on Jim Martin having been disinvited from some speaking gigs, but another scholar, Rebecca Bratten Weiss,  has also dealt with articles with smear her name.

I won’t spend a ton of time on details you can find on your own. There’s a lot I could say about this – one item at the top of my mind is the chilling effect this has thinkers who are exploring, within the bounds of orthodoxy, how to read the signs of the times and bring our faith to them.

But what I’m thinking about most clearly is being nice. I’m active on Twitter, and I often see people who I otherwise respect and admire writing things that are truly cruel online. The only trope that occurs more often than silly memes against Fr. Martin is “feminists are ugly” which is tired, untrue, and obnoxious.

In addition to those whom I know, I see the writings of strangers such as those who went after Jim Martin, calling him “pansified” and a “homosexualist” (what does that mean?) with the intent to insult. One tweet that caused a stir referred to an online dispute between Fr. Martin and another priest and said that Fr. Martin was “beaten like a rented mule.” Fr. Martin took offense to the violent metaphor. In my eyes was probably not an incitement to violence, but it was definitely nasty. Is that where we are? Gloating over two priests arguing? Heaven help us, literally.

I used to think that being nice didn’t matter, that one could be holy without being nice. I know better now. Online or in person, please try to be nice. Mean does not look good on anyone. It does not make you sound tough or cool. It makes you sound negative and uncharitable.

Being nice – or even just not being mean! – can be hard work. Speaking truth and engaging with those with whom we disagree without being nasty can be even harder. Learning to do all of those things has helped me sleep at night. I highly recommend it.