With record snow and cold in Boston and doctor’s orders to stay home (more on that later) I have lots of time to share with you some of my favorite things. I’m linking up with Leigh Kramer, who always curates a great list of recommendations on her blog, and who reminds me to stay positive and stay engaged!

I’m just saying, I read a book from the bestseller list. That rarely happens, but once again I was the recipient of the largesse of a friend in a book club who often hands-me-down some of the hottest books out there.

This book was masterful. I’m going to compare it to War and Peace – stay with me. It’s rare that a novel manages to capture the large-scale cultural issues it hopes to tackle while also providing an engaging small-scale narrative. Though Tolstoy was addressing Russian society and Adichie plants her story in contemporary Nigeria and America, I see the same dual-track mastery in both (and believe me, the current bestseller, at about half the length of the Russian classic, was a much easier read).

The protagonist is a blogger, which gives the opportunity for culturally-loaded diatribes that don’t seem forced – they are simply excerpts from her work. There is much to be learned and debated from this book, but when I reached the final pages I barely cared about any of the sweeping universal themes. I just wanted to know what happened to the characters I had come to know. An extraordinary book. 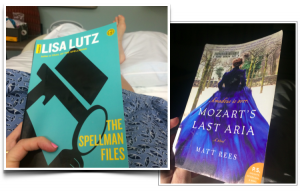 How did I find time to finish a novel of a few hundred pages? Sadly, because I had a lot of free time in the hospital this month (more on that later!) As soon as they found out that I would be having “semi-elective” (read:urgent) surgery after a weekend hospitalization, my friends leapt into action, making sure that I had plenty to read in my convalescence. One wonderful friend leapt onto Amazon and sent me The Spellman Files: Document #1

right away, which was one of the most thoughtful gestures I could have imagined. I grabbed a few paperbacks from the local library as well, including Mozart’s Last Aria: A Novel

. Neither of these are high art, but they were absolutely perfect for the first hazy days after surgery.

[Next month’s post will likely feature many of the books in the basket given to me by my coworkers the day before I left for a three-week medical leave. I truly have the best coworkers one could ever imagine.]

The Soiling of Old Glory: The Story of a Photograph That Shocked America

I have been meaning to read this since it came out in 2008, just after I read the classic book on the Boston busing crisis, Common Ground: A Turbulent Decade in the Lives of Three American Families

. It can’t be easy to write anything in the shadow of the aforementioned book by J. Anthony Lukas, which is both exhaustively researched and marvelously readable, and which is quite simply one of the best books I have read in any genre.

By focusing on one Pulitzer Prize winning image of a teenager from Boston swinging a flag while protesters/rioters assault an African-American crossing City Hall Plaza, Masur wisely limits the scope of his book while opening up areas of interest such as photography and the media. He doesn’t skimp on historical context and personal narrative, making this a manageable alternative to some of the more comprehensive books about busing in Boston.

Snow is piled up outside but we are getting close to gardening season! A few of the books that I have been skimming include:

Apartment Gardening: Plants, Projects, and Recipes for Growing Food in Your Urban Home

– easygoing, great for beginners without dumbing things down, Herb Gardening from the Ground Up: Everything You Need to Know about Growing Your Favorite Herbs

– great suggestions for plotting out moderately-sized herb gardens, from the man behind one of the best nurseries I have ever visited, Container Gardening For Dummies

– helpful, but pretty much what you expect from the Dummies series, Vertical Vegetables & Fruit: Creative Gardening Techniques for Growing Up in Small Spaces

– creative, and just what I was hoping for to give some inspiration for how to grow our fair-weather harvest up instead of out.

Why am I suddenly planning new balcony gardens? Because we bought a condo with not one but two decks! We are scheduled to close mid-February, which gives me just enough time to get a planting plan in place for spring.

Though all of my doctors have been in the BMC system since I moved to South Boston in 2003, I never knew much about how the hospital and affiliated medical school worked until this month. After terrible Crohn’s symptoms which began around the first of the year (I threw up just after midnight on New Year’s – my life is nothing if not poetic), I went to the emergency room on the Friday of MLK weekend and was kept there through the holiday. After extensive consultation with (interrogation of?) every doctor who made their way into my room I finally agreed to surgical intervention which had been on my to-be-avoided list since my diagnosis.

Back I went about ten days later,  comforted by the new familiarity I had with the GI attendings and fellows on both the medical and surgical teams as well as with the nursing staff on the various surgical recovery floors. To be succinct, my care was outstanding, and I can’t say enough good things about the Boston University School of Medicine and its students and faculty.

The care of the people I love

Whoa. Here come some tears as I think about the people who have helped me during the past month. I’m not really into accepting help, though I like to think that I am emotionally healthy enough to accept love and care. When my surgery was scheduled my mother told me that wild horses couldn’t keep her from being with me, and my brother immediately committed to being with me (and being with our mother!)

As we learned that we had less to worry about from wild horses and more to worry about from an incoming blizzard, I came up with a travel plan that would get me on the table on schedule (because my bridal shower is this weekend and I didn’t have time to wait!). Mom and brother got a hotel room that was “only” half a mile from the hospital (rather than the two mile distance from my apartment), I spent the night there, and we bundled up and walked to the operating room.

Adding to the cinematic elements of my life, this surgery was also my dear fiance‘s second day of work at a his new job in Boston. Finally, we are no longer a long-distance couple! But he was on the air working twelve-hour shifts while my mom and brother were at my bedside, which I think was harder for him than it was for me (I had morphine, after all). After my discharge, though, I learned that he speaks my love language. When you find a man who will shovel you out, never let him go. 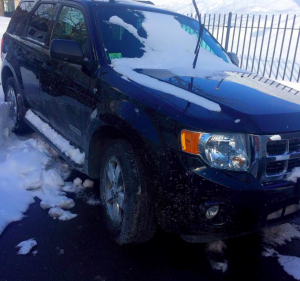 Everyone loves a few days of forced confinement in the winter, when we have to accept the higher heating bill and enjoy some time on the couch.

That said, this current stretch of crazy weather overlaps with my medical leave, so please, please reach out and connect! I will soon be tired of staying home.

I am frustrated with my inability to work out and my inability to eat the foods I consider healthy (a low-fiber, low-residue diet is counter-intuitive). I’m trying to stay on top of work from home, partly out of boredom and partly out of obligation. I promise to follow doctor’s orders and get plenty of rest, but I hope we can keep each other virtual company as my recovery drags on!

What should I read? Listen to? Watch? Write? What are you into??

Disclaimer: This post contains Amazon affiliate links. Purchases made through these links send some change into my piggy bank at no additional cost to you.