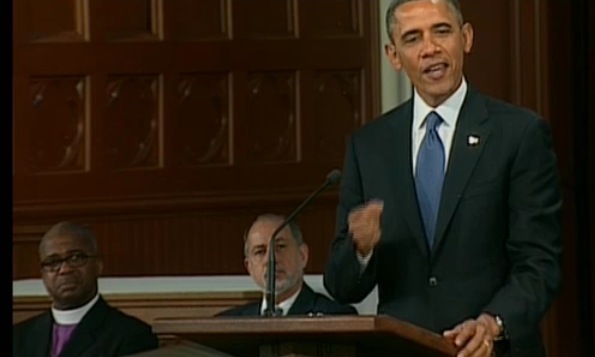 The President spoke brilliantly and compassionately, demonstrating as he often does that words have such power to inspire and heal. He spoke of his own experiences living just outside Boston (in that town on the other side of the river), and mentioned that others claim Boston as well. Most moving for me was his riff on how Boston has a way of welcoming: immigrants, students, scholars, and once a year, runners. Because people tend to focus on the times in history when Boston has been less than welcoming, I had never thought of our culture that way. But it’s true.

Mayor Menino also talked about the city, of course, standing from his wheelchair to speak. He said how proud he was of the homeowners, first responders, National Guard, BAA volunteers, and all the residents of the city. Deval Patrick focused on the gratitude he felt for all of the goodness that has shown these last few days, beginning with an admission that sometimes the Biblical admonition “in all things give thanks” can be a tough one to follow.

Though the blessed civic leaders who spoke today will be the ones featured in the soundbytes and newspapers, I think the real stars of this service were the faith leaders. Nasser Wedaddy, head of the New England Interfaith Council reminded me of all the good people who work for peace and unity even when the cameras are off. He offered prayers in Arabic and English, and spoke of being naturalized as a US citizen recently. He says he never imagined that we would face “enemies foreign or domestic” so soon, and in his own city.

Rabbi Ronne Friedman, senior rabbi of Boston’s Temple Israel, gave us the words of an Hasidic sage: The entire world is a narrow bridge, and the most important thing is to overcome your fear.  Metropolitan Methodios, who I am ashamed to admit I would not have been able to identify as Greed Orthodox Metropolitan for our region, casually reminded us that the marathon has Greek origins.

Bishop John. M. Borders III from Morningside Baptist Church read the Beatitudes, adding that “to perceive the Kingdom you have to see its opposite“. He also cited the Massachusetts license plate, just like the one on my car, that bears the title “The Spirit of America“, and stated his certainty that today Massachusetts was showing that spirit.

Cardinal Sean O’Malley, who always impresses me with his preaching, also referenced the Beatitudes, and was one of many to speak on the theme that love is stronger than death. He relayed a message from Pope Francis, and ended with the Prayer of St Francis, a perfect prayer for the day.

Nancy S. Taylor from Old South Church, at the finish line, made me tear up by stating that “another’s cruelty will only redouble our mercy“. She repeatedly referred to our bodies as sacraments, in the ways we push them and in the ways we use them to respond to others’ need.

Rev Liz Walker of the Roxbury Presbyterian Church gave the introduction, and didn’t pull any punches, leading her prayer with a reflection on theodicy, the problem of evil. As I’ve written elsewhere, there are certain things you don’t expect to hear in a public speech, and it is refreshing when someone dives deep into murky theological waters.  She ministers in a part of the city that is more familiar with violence and evil than others. Though Roxbury was not the site of any of the six shootings in Boston last night, I couldn’t help but hold her words and that fact side by side. Most of those who hear her will remember her as an intense, gifted, thrilling preacher, my admiration was compounded by the knowledge that she may have more cause than most to contemplate theodicy.

Also from Roxbury was Reverend Roberto Miranda from Congregación León de Judá, a mainline American Baptist Church in the part of Roxbury that often calls itself the South End. His poetic remarks should be required reading for students of preaching.  He said we have “a benevolent God who holds a steady hand over history…in the end goodness will always prevail.”  Remaining focused on God’s goodness, he claimed “God is weaving a tapestry of goodness with a few dark strands“. And it was he who used the phrase I chose for my titled today, proclaiming “we are all children of eternity.”

That is what struck me today, watching people come together knowing that the only response to such a tragedy was to seek communication and communion with God. When our foundations are shaken and when we see that astonishing capacity of the human heart to overcome evil with good,  we see that we are part of something bigger than ourselves, and recognize that God holds that miraculous union together (though in ways that are often inscrutable). To hear people who seek God down such different paths come together and state our universal truths was just what I needed, and possibly just what the city needed as well.