If mass had been in the upper church we would have been on time. Instead, it was in the clean, wood-floored lower chapel, and the few minutes we rain through the rain trying to find an unlocked door were the same minutes that the holy day liturgy was beginning. Our wet rubber sandals squeaked into the back just before the Gloria, as the sacristan was putting out folding chairs in lines behind the pews.

Since we were in the smaller space, mass felt packed. The rain pounded against the windows, raincoats were draped all over and umbrellas lined the foyer. There were faces there I recognized, and some that were new to me. We engaged in the usual up and down, call and response as usual, until after the Holy Holy.

When it came time to kneel for the consecration, the folks in the front descended to their kneelers. Most of us in the back didn’t have kneelers, so everyone sat down on the cushioned folding chairs. I was in the second to last row, between my boyfriend and a woman who had not returned my smile when she snuck in beside us during the first reading. They were happily sitting next to me, and I remained standing.

You’re not *supposed* to sit after the Holy Holy. You’re *supposed* to kneel or stand. I don’t think God cares. I’m not even sure the bishops care what we do on rainy Wednesday morning the basement of a big stone church. I’m not sure that I care. But today I did.

My body wouldn’t obey the crowd around me. I couldn’t kneel in our narrow row. I stepped to the other side of my boyfriend against a wall where I wouldn’t be a distraction as I happily stood and bowed during consecration. I probably looked ridiculous. I fear I looked like one of those sticklers who follows the rules to the point of being a jerk. Even the General Instruction of the Roman Missal, from whence cometh these rules, frequently gives us the out of “reasonable cause” for breaking them. But I want to follow them. 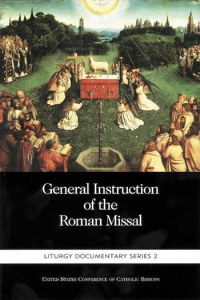 Somewhere between kneeling, standing and sitting is the unfortunate space I occupy. I respect rules and guidelines, but I refuse to make an idol out of them. I want to follow them, but I don’t want to do so only so that others might recognize that I know them. I believe the longstanding wisdom of the Church is indeed wise, but I want to bring it into the present and examine it in the light of the signs of the times.

I can’t be the only person who feels like I don’t fit anywhere. I neither throw the rules out nor chain myself to them. I try to listen to my gut, which follows no party line. It’s a messy place, away from the labels of conservative and liberal (or even traditional and progressive), one where you please no one and often find oneself stuck between standing and sitting.