Happy New Year! I wasn’t able to post much in December, since I was booked solid with concerts and rehearsals the whole month. I did sneak in some time to read (once by showing up reeaaallly early for an audition) and am excited to link up with Leigh Kramer and share What I’m Into.

The unnamed narrator of this petite novel by Weike Wang is dealing with a life that is falling apart – or rather, her life falls apart a bit, and she really fails to deal with it. I generally have trouble with books about people who can’t deal, but this one had me really rooting for the main character, and feeling relieved when she started to move on a bit at the end. Great book, quick read.

Everything I Never Told You

Many of you know my trick of getting a popular author’s earlier books from the library while waiting for their hottest title to become available. (In fact, Boston Public Library just rolled out a “while you wait” feature that suggests other available options when you put in a request for a book – GENIUS!) That’s what happened here, since Celeste Ng’s first book was on the shelf at my local branch. Heartwrenching mystery and family drama, all explored with tenderness.

The Leavers: A Novel

It was just coincidence that this month I read three books about Chinese or Chinese-American adolescents. Lisa Ko’s Pen/Bellwether winning novel was set in New York and parts of China and hits every mark: the tortured inner life of an abandoned, rudderless teen and the scrappy sacrifices of an immigrant mother. I read it in one sitting.

Years back I did a workshop with Jackson Katz during which he posited that American presidential elections are effectively referenda on American masculinity. He mentioned he hoped to write a book on it and I periodically checked to see if it had come out. So in a sense I have been waiting for this book for years. As a social history it occasionally gets itself in the weeds, which is not meant as criticism but as an advisory to anyone looking for a quick read. Full disclosure: I skimmed some parts.

I had so many concerts in December! First I did my full complement of Holiday Pops concerts (sporting a new, homemade Advent wreath headband during the singalong. See below. I’ve never been prouder!). Of course there was lots of singing on the Sundays of Advent, Immaculate Conception and Christmas.

What made this year unusual were two concerts after Christmas. Usually I can crash at noon Christmas Day, but that was not the case this year. I sang with West Stockbridge Chamber Players in a fundraiser for the West Stockbridge Historical Society, performing Shepherd on the Rock and St Anthony Preaches to the Fish. The first is common rep, the second not so much, but that unknown gem was an hysterical piece which I enjoyed working on. I’d never been to the Berkshires during the winter before and they were so lovely. Special thanks to my husband for driving me around so I could be a diva while we were out there (actually I’m not a diva we stayed in a motel).

On New Year’s Eve I was part of a concert with Longwood Opera for New Year’s Needham, singing three arias. The producers encouraged me to dust off a Korngold aria that I hadn’t sung in ages and it felt great to work on it again!

We also attended some shows and concerts. On Black Friday we went to Broadway to see Come from Away, which continues to be one of my favorite contemporary musicals. The production and entire piece are close to perfect.

Just before the new year Boston Baroque did a free community concert at our local theater. The program was jubilant repertoire, including Handel’s Gloria for solo soprano which I hadn’t heard before. It was flawlessly sung by Mary Wilson (the soprano, not the Supreme).

Coming up next, Carmen in January with Opera NH!

My latest in Classical Singer Magazine was published; I wrote about affordable summer programs for classical singers. Sadly, the article is behind a paywall, but if you’ve got a login (and you’re interested in summer programs) check it out!

Sent off a first draft of the mammoth manuscript I spent most of the past year working on. I was so nervous I nearly threw up. But it feels good to have reached this milestone!

I put up three blog posts recently too: Life Lessons from Church Singing, Your Advent Guide to Casting Down the Mighty, and Make Straight His Paths. If you have a post that’s worth a read please leave it in the comments!

The Murakami exhibit at the MFA is delightful.

It is freezing in Boston. 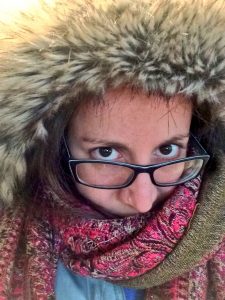 I have a short list of things to read next, but am always looking for recommendations so send them my way: what have you been into?

Disclaimer: This post contains affiliate links, which sends some change into my piggy bank at no cost to you.