Summer vacation has come to an end and I can honestly say this was one of the best summers I’ve had. We travelled near and far, I wrote and sang a ton, read a record number of books, and saw lots of friends. Thanks as always to Leigh Kramer for the opportunity to linkup and share what I’m into!

My Name Is Lucy Barton: A Novel

What to do when you can’t get an author’s latest book from the library? Read another book featuring the same characters. I’m late to the party so you all have probably read this so I’ll skip any review or description.

The Stars Are Fire: A novel

Continuing my summer theme of books set in New England was this novel about a destructive wildfire in Maine in the 1940s. Grace manages many relationships in the aftermath, including family obligations and romantic attachments, but I found the depiction of her friendship with a close neighbor to be most compelling.

Not my fathers son: A memoir

Alan Cumming’s dad was a jerk…or was he?? (Was he his dad, not was he a jerk). This memoir shares details of his childhood in rural Scotland, as well as the turbulence of going on an ancestry-related reality show. He’s just as charismatic a memoirist as he is an actor.

The Sense of Style: The Thinking Person’s Guide to Writing in the 21st Century

Steven Pinker uses excellent examples of “real” writing to illustrate some of the principles that make writing shine. I have flagged a few passages that I hope to share with my students. 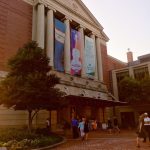 The national tour of this musical (in a reworked version from its debut) kicked off in Hartford, so I went with my mom back to the beautiful Bushnell where my love of theater was launched. The show was a little too long and a little too loud (both of which were problematic for the many children in the audience) but the visual display was spectacular.

I wrote about how moved I was by my recent trip to Tanglewood, the summer home of the Boston Symphony Orchestra. I have been going there as a member of the Tanglewood Festival Chorus for the past twelve summers, and this residency was the busiest I’ve ever had. We sang a chorus-only prelude concert featuring Jonathan Dove’s Passing of the Year

, were part of the Saturday evening opera gala, and rounded out the weekend with the traditional season-ending performance of Beethoven’s Ninth Symphony. The only downside is that it meant the end of summer! Thanks to my honey for taking some great pix at the Prelude Concert. 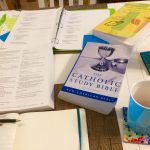 I reached a major milestone in work on the daily devotional I am writing when I got to the end of Ordinary Time! Next up: transcribe and edit (I wrote the whole thing in a journal). I also have to write two Advents, and hope to go on a short retreat in the fall to create those reflections.

We took a lovely trip to Cape Cod with friends, enjoying a trip to Cape Cod Brewery (where we played an off-brand version of Jenga) and a leisurely walk to to the top of the Provincetown Monument. Another highlight was the Cape Cod Canal museum, which fits a lot of learning activities in a small space. Because the bridges are such a hassle we have gotten out of the habit of going down the Cape, but maybe that will change! 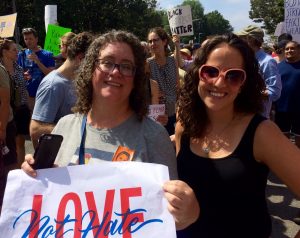 I was consoled by how many of my friends were marching with Black Lives Matter and others two weekends ago in Boston. While a controversial free-speech rally gathered on the Boston Common, tens of thousands of us met in Roxbury to march down a main thoroughfare in support of marginalized populations. I wrote earlier this month about how grateful I was to the organizers for giving people in New England an outlet for their post-Charlottesville distress. I also really appreciated that the event brought people to a neighborhood that many affluent Bostonians never visit. Everyone has an opinion on the many events of the day, (I appreciated Chris Faraone’s take in TNR)but from where I stood it was beautiful. 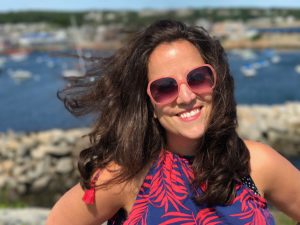 My sweetie and I are hooked on beaches, which is probably why there are so many pictures of me in the same beach dress this summer. Hoping to squeeze in one more day on the water this season, but the weather in Boston has turned cool and I fear we may have to wait until Memorial Day to get back out on the sand.

I hope your summer months were just as delightful as mine. What have you been into?

Disclaimer: this post contains affiliate links. Purchases made through these links send some change into my piggybank at no additional cost to you.