Whoever hears the message of the resurrection of Christ in such a way that in it the cry of the crucified has become inaudible, hears not the Gospel but a myth of the victors. – Johann Baptist Metz

There are so many things one could say about the events of the last few days. The conflict in Charlottesville and ensuing presidential statements touch on racism, anti-Semitism, political violence, neo-Nazism, free speech, the Civil War, open carry laws, and so many other realities that it feels as if every nerve has been touched.

I’m careful, in moments like these, to avoid making this “my tragedy”. Appropriation of tragedy becomes more abhorrent to me as our society becomes more violent. Solidarity is another thing entirely, but I recognize I can feel that familial solidarity with the suffering without necessarily having anything original to say. So I haven’t said much.

But then today, something was said to me. On a whim I picked up an old book on the shelf: A Passion for God,

a collection of essays by German Catholic theologian Johann Baptist Metz. I opened the book and a self-written vocab list fell out. Near the top? Anamnesis. 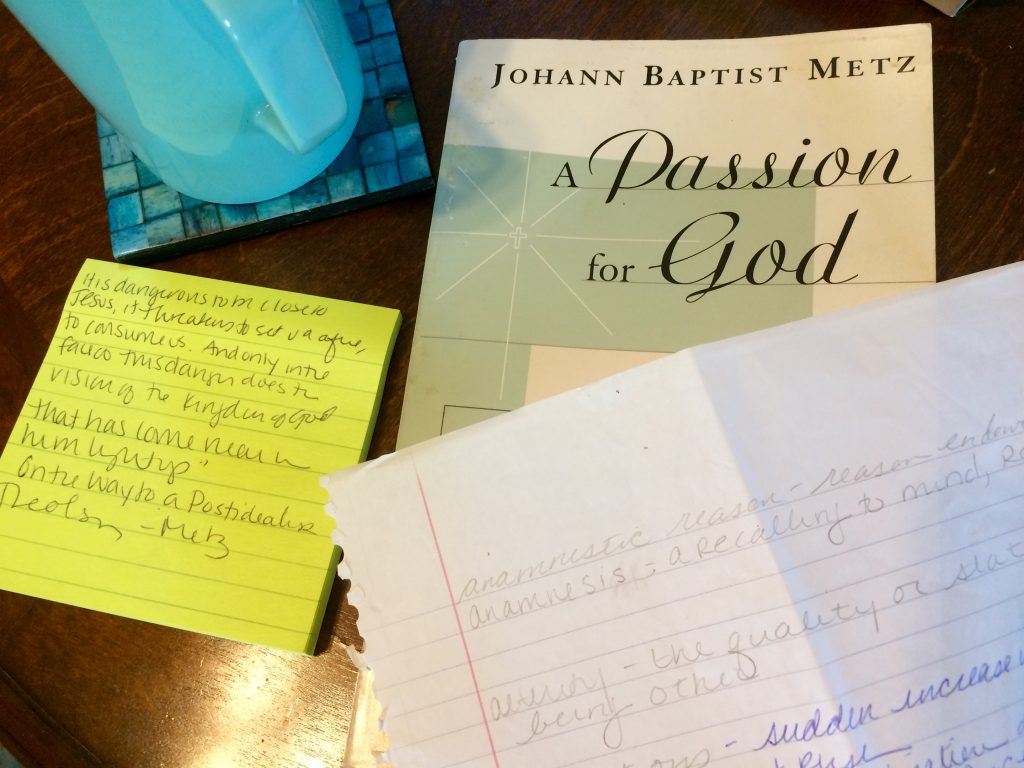 Memory. That’s certainly timely, as we watch attempts to rewrite history in real time, and grapple with the American historical memory that has never healed. Though most often used in theology in reference to the calling to mind of Jesus’s sacrifice in the Eucharist, it is also used more broadly by Metz (and many others).

Having lived through World War II, Metz is especially concerned with Christianity after Auschwitz.

“We Christians will never return to a time before Auschwitz; we will never get beyond Auschwitz alone, but only together with the victims of Auschwitz. In my view, this is what it will cost if Christianity is to continue on the other side of Auschwitz. Do not say: But after all, there are for us Christians experiences of God other than those of Auschwitz. Certainly! However, if there is no God for us in Auschwitz, how can there be a God for us anywhere else? And do not say: Such a notion violates the heart of the Christian teachings that tell us how in Jesus Christ the nearness of God is irrevocably guaranteed to Christians. Because the question remains: For which Christianity is this promise valid? For example, does it hold for a Christianity that identifies itself with anti-Semitism and is among the historical roots of Auschwitz? or does it hold exclusively for a Christianity that can only understand and proclaim its own identity in the face of Jewish suffering? …Has the memory of Auschwitz transformed us in our existence as Christians?”

I hope it won’t seem to minimize the monstrousness of the Shoah if I expand this concept. Can we be Christians if we don’t allow the horror of American slavery to transform us? If we don’t acknowledge the plagues of racism and anti-Semitism and other forms of bigotry, and accept the challenge to better understand God and ourselves in light of those evils?

“It is precisely because Christians believe in an eschatological meaning for history that they can risk historical consciousness looking in to the abyss. Precisely because of this, they can risk a memory that recalls not only the successful but the ruined, not only that which has been realized but that which has been lost, a memory that in this way – a dangerous memory – resists identifying meaning and truth with the victory of what has come into being and continues to exist.”

The concept of “dangerous memory” runs throughout Metz’s writing.

“It is dangerous to be close to Jesus, it threatens to set us afire, to consume us. And only in the face of this danger does that vision of the Kingdom of God that has long come near in him light up.”

If we give our attention to our current moment and to historical moments, and if we bring our faith to those moments, will it set us afire and consume us? It might, and it should. Avoiding that fire is a lack of faith, and a sin of which I have been guilty.

Do we believe in God – or do we believe in our faith in God, and therein in ourselves, or in what we would like to hold about ourselves? If however we believe in God, can we remove from that faith the elements of crying out and expectation? Here one of the constitutional temptations of Christianity is rooted.

This mashup of quotes gives only a cursory introduction to a great theological mind. I hope I have done justice to his ideas as they touch just a small piece of our current cultural moment. I needed the support of someone else’s words, as I can’t come close to expressing all that is in my heart on the resurgence of public hate speech and subsequent laying of blame.

If nothing else, opening this book today assured me that my inclination to bring my fundamental theological convictions to an understanding of our world is the right one. I believe that God created all people in love, that the Lord hears the cry of the poor, that whatever we do for the least of our brothers and sisters we do for Jesus.

Because of these convictions, I have to give special attention to those who are oppressed or vulnerable and I have to reject speech and action that deny the dignity of the human person. I have to view history and the present in light of the good that God wants for all people, and judge it by that standard, because “Even if one does not want to locate the essence of religion in politics (even an enlightened politics), one may not keep silent about the political dimension of theology!”

The first three quotes in this reflection are from “The Church After Auschwitz”, the second two and the final from “On the Way to a Postidealist Theology”, and the quote beginning “Do we believe in God” from “Theology as Theodicy?”. Both are found in English translation by J. Matthew Ashley in A Passion for God: The Mystical-Political Dimension of Christianity