Her name was Eudocia Tomas Pulido. We called her Lola. She was 4 foot 11, with mocha-brown skin and almond eyes that I can still see looking into mine—my first memory. She was 18 years old when my grandfather gave her to my mother as a gift, and when my family moved to the United States, we brought her with us. No other word but slave encompassed the life she lived. – The late Alex Tizon writing in the Atlantic. 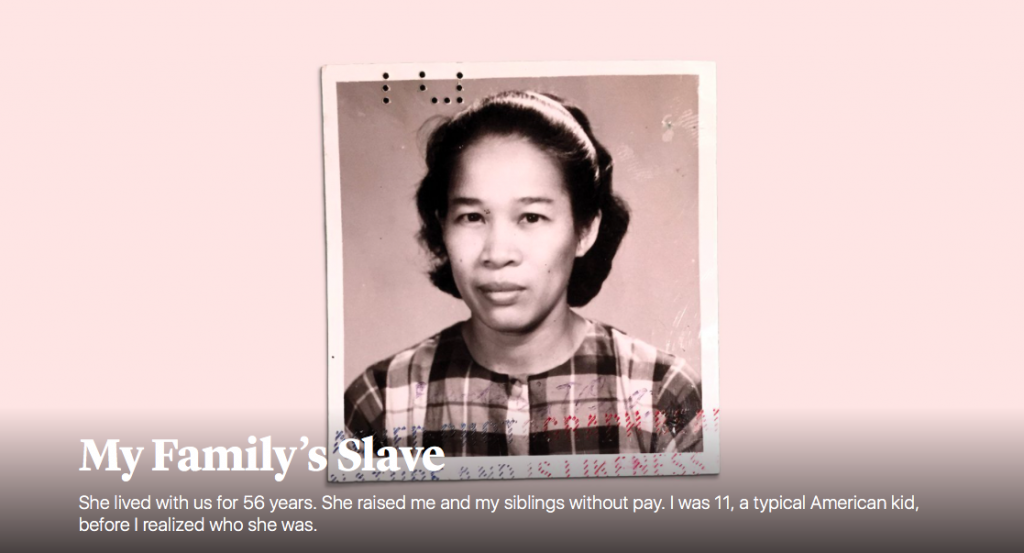 Since this article went live earlier this week it has been filling my Facebook feed and trending on Twitter. That it has captured people’s attention is no surprise: it is exquisitely written personal essay on a shocking topic. And it takes place in America, built on slavery, yet where we think no more slavery exists.

I took the time to read it, and I marveled at the astonishing cruelty that people are capable of, and I cried.

Later that same day, I started reading responses to the essay that were critical of the author, his family, and the essay. (Most of these were Twitter threads. When will people start writing in paragraphs again??)

One focus of critique was the undeniable evil of slavery, arguing that the author’s attempts to explain it away or cloak it in love were disingenuous or insulting. That he did not include the “detail” of her slavery in her obituary has made his sentiment harder to defend, and his early death in recent months makes it difficult to know more about his motives.

How do we tell stories of evil?

But I really don’t want to opine on the author, because I’m still thinking about how we tell stories of evil. The essential element of his essay is the mistreatment and enslavement of human being. This is an evil so great that it should be the end of the story. But Tizon’s piece challenges us because it makes it so clear that there is much more to say. Could it be that stories of evil are simple and complicated at the same time? If the details of a story seem to mitigate the evil of a situation, is the story better not told at all? Can we hold the sweeping horror of evil and the nuance of individual stories in our minds at the same time?

I can’t help but see a connection to the recent conflict over Confederate monuments, particularly in New Orleans. These represent a fundamental evil in our nations’ history, but they also represent the reality of history and of individuals’ lives. (Of course I do not mean to draw a perfect analogy between the two. There is a world of difference between a monument and a memoir)

We want to know the truth, but those who share the facts, even if everyone agrees on the facts, control the truth. We treasure the writings of Holocaust survivors, because they give us the history of that monstrosity from the bottom up, as it were. They add nuance to our understanding from a place of powerlessness. We feel we can trust them to enhance our understanding, and value the power that comes from telling their story.

Despite his complicity he writes with love (perhaps imperfect love, if there is any other kind) and attempts to honor her by giving her a voice. He wades into the messiness of the situation, and the ways that love and violence lived side by side in his house. It’s disturbing stuff, and it’s probably something that we should be arguing over. It should unsettle us.

Ultimately, though, I think these stories are better told than untold. If they stir us up and get us talking, all the better.

Did you read Tizon’s essay My Family’s Slave? What did you think? What standards should we have when telling stories of evil?

Photo: A screenshot of this story on The Atlantic’s website.