If I know I have to convince someone of something, I wear more makeup that day.

Using the unscientific data of my lived experience, I can safely say that I am more likely to get what I want if I look pretty. And to the young man on Facebook who recently whined that women “use their sex appeal to get what they want”, I’m ready for you to point me toward another option. Sometimes smashing the patriarchy just gets exhausting, and you do what you have to do. Believe me, I would much rather read the news in the morning than blow-out my hair.

I’m still young, which helps, but comes with its own frustrations. Recently I managed an event and was told afterward “wow, that was really professional!” I know it was meant as a compliment but I bristled. I am a professional. Why would my professional work be surprising? Oh right, because I’m a girl.

But the alternative to being a girl is to being invisible. At a certain point, you just disappear, and no amount of makeup or hairstyling can get people to listen to you. You may be able to delay that moment with Botox and Spanx and dieting, but it will come for you.

A few months ago Hillary Clinton stumped in New Hampshire with Jeanne Shaheen and other women in politics. At the end of the event they all danced around like your great-aunt boogalooing at a wedding, and I thought maybe there is a future after all. People are cheering for these women. They are on stage in sensible shoes. This is progress.

Last night Hillary Clinton made history as the first woman to accept the nomination to the presidency for a major political party. You know this already. What you may not know is that about 45 minutes into her speech, I realized people were still listening to her, and I got goosebumps. 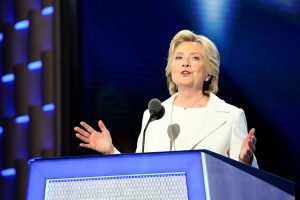 She had wrinkles and hips and short hair and, by some mean-spirited accounts, cankles, which were not visible under a nicely tailored pair of slacks. She spoke stridently when she needed to. She criticized and exhorted and never apologized. She was 68. And we were still listening while she spoke seriously and at length about some of the most important issues in the world.

My heart nearly burst for excitement. Maybe there is a longer future than I expected. Maybe I won’t age out of influence. Maybe I can focus my energy on working hard rather than working out, and on making a difference rather than staying as skinny as I can. Maybe I can start wearing flats.

There is still progress to be made. We were listening to a white woman who had played by the rules of power, except for the one that says shut up at a certain age. There will be plenty of conflict and strife for the rest of this election season but for now, I’m enjoying this small victory.

What do you think Hillary’s nomination means for women?