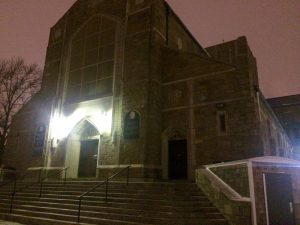 The homeless shelter I visited this week in my neighborhood is not a sign that we are doing anything wrong, but rather that we are doing something right. A local parish is the one that opened its doors in response to a need brought to light by the recent closing of another shelter. They were the ones willing to take people in.

Each evening vans come in shifts from the main downtown shelter with 60 men for 60 meals and 60 beds. In the morning the men rise in shifts to shower, shave and dress, departing before the sun is up on those same vans to be dropped at the subway or back downtown.

They wear suits and dress pants and sweaters, nice jeans and do-rags, sagging pants and caps with brims cocked. Some look like my family, my peers, and my friends. Most work or study. After dinner, tables are covered with books while men study and read and look for jobs. Some retreat to their beds and watch movies or rest quietly.

I know these things, of course, because I walked through their dormitory on the way to get my coat.

The men were pleasant to me and the students with whom I visited. Some showed a longing for a connection, and some a desire and aptitude for mentorship. I tell you about them because I want you to know that they are human. I want you to be bothered by their homelessness.

But I also want  you to be just as bothered by the homeless who don’t go to school, who can’t speak kindly and clearly to the wandering do-gooders who show up at their door. There are many vulnerable people who are sick, mentally ill, or disabled, and that we have dropped their safety net might be more horrifying than the struggles of the “able” poor.

And of course, there are those poor who do not meet our standards of virtue. Enough pundits focus on those “undeserving” poor as a way to absolve themselves of their lack of care, so I will not.

Public education is not equal and is in many places inadequate. Minimum wage doesn’t support a worker, and some employers exploit workers with impunity. For-profit prisons encourage the warehousing of some populations (yet sadly, for many poor, prison is the only place to access education and social services). Those released from prison can’t get jobs. Rents skyrocket and longtime tenants are driven out. Public transportation can’t meet the needs of those without cars and limits their opportunities. Check cashing businesses on every corner take large chunks of urban paychecks. Credit card companies lure customers who will make minimum payments. Not long ago banks did the same thing with mortgages, hoping to keep people riding the edge between paying obscene amounts of interest and not paying at all. We only cried out against this when it affected the entire economy.

This is why statements like “poverty is free enterprise not reaching people” make me burn. Poverty is the opposite: it is unrestricted capitalism, practiced without morals or ethics, reaching everyone. Without regulation, it is a system that privileges the haves reaching the have-nots and wringing them dry. What’s that, you have a story of someone who pulled themselves up by their bootstraps? That’s nice, the system is still unfair.

Many political arguments focus on from where the remediation of poverty should originate. The left tends to think the government should provide aid; the right, private individuals and charitable groups. Wouldn’t it be nice if both sides could at least agree that the government should enact policies that protect workers and promote the well being of all citizens, preventing poverty before it can occur? I respect business owners enough to believe they can treat their workers well and still thrive. I do not, however, trust them all to do this unregulated when faced with the temptation of a cutthroat market.

So what about charity? I participated in the work of a charity this week, though my gawking, chatty presence can hardly be considered an act of charity itself. This organization provides such a comprehensive system of services that its initiatives cross beyond the bounds of charity and are doubtless acts of justice. It’s hard to imagine  world in which certain individuals didn’t have to choose to donate, choose to sacrifice, in an attempt to level the playing field.

Though I sacrifice money and time freely (and with no small amount of pride, to be honest), why should I have to, why should my students have to when others don’t? Caring about others ought to be the rent we pay for living in society, for living on this earth. Why are some people not paying?

Some of our services should come from taxpayer-funded programs, but more importantly, laws and regulations should be put in place that level the playing field. If that means the rate of wealth accumulation for those at the very top slows a bit, so be it. It’s the rent we pay as part of humanity. This is, of course, a moral argument, but most Americans claim to be moral people.