This time last year I was home on medical leave, and my soon-to-be-husband was working morning shifts. He would wake around 2:00 am, which didn’t bother me much since I had nowhere to be. We’d chat before he said goodbye and I’d laze back to sleep, usually rising just before the winter’s late sunrise to watch him, and wait for him to come home in the afternoon and take me out on some diverting excursion. We joked it was good practice for when we were elderly.

One Thursday evening, after watching the DVDs of The Mindy Project that I will forever associate with my convalescence, I went to bed with frightening pain, familiar yet different than the gut pain that had dogged me during my Crohn’s flare. I worried that my ostomy was blocked, and I rubbed my belly as I always had, this time reminding my fingers to avoid the place where my intestines hung out my sides.

He left at his appointed time, and I was in pain and exhausted from a sleepless night. I took some medicine and managed to sleep for a few more hours, waking with the sun, groggy and aching. From my bed I shuffled the few feet to the TV – little was more than a few steps in the tiny basement studio. I started the coffeemaker and sat on the futon, seeing but not understanding what was on the TV.

After hearing the tell-tale beep I went to the kitchen – the only other room – to get my coffee. As soon as I passed from the kitchen tile back into the carpeted living space the mug slipped from my hand. Coffee soaked into the rich green carpet. I slowly leaned over toward the side opposite my ostomy to pick the mug up, and looked at the rest of the mess as I rose. I couldn’t possibly clean it. It occurred to me that sweeping earlier that week might be the cause of my current abdominal pain. I threw a towel over the spill and went back to bed.

I had told R that I would get a quote for homeowners insurance that day, since we were in the process of finalizing a condo mortgage. He got home around 3:00 and I was in a daze in the bed, my laptop by my side. I was in too much pain to lift myself from the bed, and I could barely think. Not realizing what bad shape I was in, he asked if I’d contacted the insurance agent, and I started to cry.

“You have to cancel your shower, “ he said once I had calmed down. The shower was in two days.

The main reason I was so insistent on having my surgery a few weeks prior, during a blizzard, was that the timing worked out for me. I would have two and a half weeks to recover before my bridal shower, and it would leave me with time to hopefully have my ostomy reversed before our wedding (the takedown ended up being ten days before the wedding).

“I won’t cancel!” I wailed as I cried harder. I shimmied out of bed to help him clean up the coffee. Later I called the Visiting Nurse hotline, who told me such pain was normal, to take some more medicine and hope it passed.

The next day I felt a bit better. I took my first adventure out on my own to have my nails done at the local salon before we got in the car to head toward my parents’ house, stopping on the way for a group tasting with our caterer at our reception venue.

We were sat with two couples who were also being married at that venue. One was a classy and reserved older couple who were being married the day before our reception. I thought about asking them to leave all their stuff for us, because I sensed they would have a better setup than we would. The other couple was younger. The groom lived in South Boston, and told me quite proudly that he was a gentrifier.

It’s sort of a shame, I pushed back, that all of the change is driving out people who have been there for their whole lives. So much is changing.

It needed to change, he replied. I don’t remember exactly what I said in response, but I’m sure it wasn’t pleasant. We left not long after that.

On the morning of my shower my mom made pancakes, because that is what she always did on Sunday mornings, and because it was low fiber, so I could eat it. I put on a dress I’d bought in a panic the day before my surgery, which would be too small for me after a few weeks of being able to eat again. We got in the car around noon to head to the home of my generous cousin who had offered to host. Snow was beginning to fall for the third or fourth time in three weeks, but mom’s silver sedan held it’s own on the Connecticut roads.

About halfway there I gasped and arched my back in the passenger seat, signs my loved ones had come to recognize as abdominal pain. When I could relax again I sighed and said “I wish I didn’t need this”, as I took another pill.

When we arrived at Amy’s house everything was perfect. There were wine bottles with letters affixed to read “AMORE”, little vials of olive oil for favors and cream puffs with our wedding date on them. Family and friends streamed in, all happy to see me after the illness and surgery that had caused them so much worry. 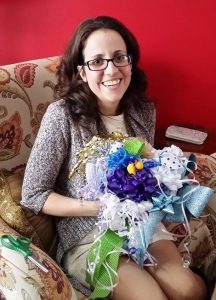 With the snow falling we settled in to open gifts quickly in case people needed to get back on the road. With my entertainer’s instinct and compulsive need to be the funniest person in the room I dragged things out too long by having to tell a story or joke after each gift. Midway through I panicked that my ostomy bag was full and declared intermission as I ran to the bathroom, shouting “Crohn’s! Can’t get mad!” as I shut the door. My bag was nearly empty.

I finished opening gifts, but my appreciation of the generosity of the women in my life continued to the delicious buffet, the deserts, and the slow trickle of my people out my cousin’s front door into the snow. There are webs of support you can’t even see because they are so integral to your life. My family is such a web.

R arrived near the end with his SUV to load in gifts. We caravanned with my mom back to their garage where we would leave our gifts until we closed on the condo the next week. The snow fell harder as we drove back to Boston.

We arrived in Boston completely unsurprised to find no parking on the city streets. There was a snow emergency in effect again, banning parking on major streets. Everyone else had long ago claimed their parking spaces. It was nearing midnight, snow was piling up, and we decided to park in the parking lot of one of the local businesses.

“You’re leaving in a few hours,” I said to him. “Are they going to tow you in that amount of time? And anyway, we have to park somewhere.” We left the car as far as we could from the “Private Parking” sign and started up the hill to my apartment. 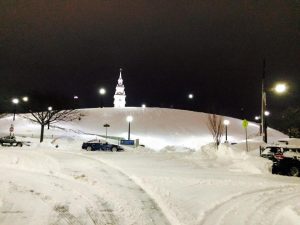 I know now that what I felt was probably the beginning of the serious wound infection that would take about ten days to properly be diagnosed. At the time all I knew was that I was dazed, freezing cold, shuddering, with pain that ranged from diffuse aching to acute wound pain. I forced myself up the hill and into my bed, shaking and too exhausted to cry.

He left quietly around 2:30 am, but tiptoed back in a few minutes later. “Where are your keys?” he whispered. His car had been towed, but luckily mine was in the parking spot I saved just before the first blizzard, with a few crates in the back to save its spot were I ever to have to take it out.

Having his car towed would have infuriated us before, but it was so cold and snowy and we had been through so much that all we could do was shrug and find a solution. I went back to sleep and woke a few hours later with more energy. I wrote about how blessed I was by my family and drank my coffee in front of the TV. When he came home I ventured behind the wheel for the first time since my surgery to drive him to the tow lot where his car had ended up.

I don’t know why I tell this story now, except that it is snowing again, and my life is so much easier, and I am scared of forgetting.