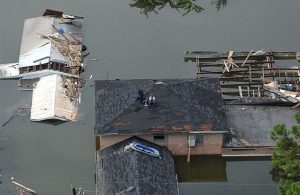 I can hardly believe it has been ten years since Hurricane Katrina, the breaking of the levees and subsequent devastation in New Orleans. Those events moved me so strongly that they have taken on a “where were you when you heard” quality that is usually reserved for the greatest personal tragedies.

This event opened my eyes – or more to the point, it opened my heart. Long before expressions like “check your privilege” made their way into the zeitgeist, watching entire communities abandoned in New Orleans taught me an essential component of privilege: having a safety net.

There were thousands of people living in that city who were one catastrophe away from losing everything. And when such a catastrophe struck, even our public safety net failed to catch the most vulnerable. Despite the heroics of individuals, the aftermath showed systemic failure. I had vaguely known that things were harder for certain populations, but the destruction that followed Katrina illustrated it in terms that couldn’t be clearer.

Part of my privilege is that I have people who will take me in, and I have a way to get to them. I have a job that will keep me on even when I’m sick. I have access to credit and informal loans. I know that when I pick up the phone to call 911, the person on the end of the line is going to help me. It’s not extreme privilege but it is something that sadly puts me ahead of many people.

One other note on Hurricane Katrina, inspired by watching Spike Lee’s brutal documentary about the event: I knew about what happened then, and I understand it better now, because of the media.

For a long time I was your typical media-hater, lumping them all in with the most opportunistic and sensationalistic infotainment providers. Meeting and marrying a reporter forced me to dismantle and critique this overgeneralization. Now that I have skin in the game, I bristle when I hear someone blithely slam the media without nuance.

The truth that we saw then and what we see now is thanks to reporters, journalists, photographers, and other news professionals. We benefit now from those images being curated and arranged into documentaries and retrospectives. In the fog of war people don’t always get it right, though the best are cautious to avoid error. In the end, most of the time, what we’re seeing is a reality we couldn’t find on our own, and I believe that can be heroic work.