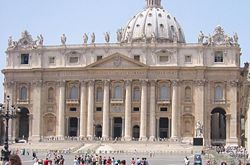 A friend alerted me today to the New York Times’ latest attempt to protect poor lil’ ladies like me from the big bad oppressive Catholic Church. In a juvenile example of whataboutism, Frank Bruni ridicules Pope Francis’ statement that women deserve equal pay for equal work, citing the positions of the Church on women’s issues that look unfair to 21st-century American eyes.*

I’m not convinced Pope Francis is a feminist, and I have made no secret of the fact that many of his comments, especially those which reflect his complementation theology of gender, don’t resonate with me. But his statement on equal pay was sincere and, more importantly, truthful. I will take what I can get.

A few of Bruni’s examples were red herrings, especially his criticism of the Vatican’s treatment of the LCWR, impugning Francis for decisions made before his tenure. A few were legitimate but could have been made with less self-righteous huffing and puffing. Yes, we need to address the fact that our church structures have fewer opportunities for female leadership, but demanding that the church change millennia of tradition, especially when one knows that this will never happen, is disingenuous.

To state “Catholicism undervalues women” paints with a broad and sensational brush. This piece frequently refers to “they”, meaning “the Church” and I’m never quite sure who that means. For me, “the Church” is primarily my local community, and first and foremost my family, my little Church. I assume Bruni means the Vatican hierarchy, but that culture is pretty far from my day-to-day existence.

There have been times I have felt wounded by the Church, and wounded in a particular way because I am female. There are time I have felt denied opportunities by the institution and denied respect by its members. Yet here I am, not only a servant of the Church but in many ways a leader. I found a way to thrive in this broken Body of Christ, and the New York Times won’t convince me I am wrong or fooling myself.

I’m not sure who the author thinks he is helping by taking the same old shots at the Vatican. I’m sure people who already agree with him will feel very satisfied that he has “spoken truth to power” (though if the Church is in such decline as he states, then what power is left?) There is always progress to be made in our movement toward a just society and Church, but I don’t think that this piece aids us in that movement. And I certainly don’t need the New York Times telling me what my value is, or keeping me safe from the patriarchy.

*This is not to say that certain policies and traditions may not be, in fact, unfair. But it’s worth highlighting the differences in priorities among Christians worldwide, as John Allen recently explored in an excellent column.

Should Pope Francis make statements supporting the rights of women? Does “the Church” have credibility on this issue? What do you think of the NYT editorial?