Food is literally what gets us through the day.

It gathers us together, it gives us joy, it affects our bodies, and it inspires our creativity.

For these reasons I’ve never poo-poohed making a sacrifice of some type of food during Lent. To alter the rhythm of our days by changing our eating patterns guarantees frequent reminders that we are in a special season.

Fasting has been part of most spiritual traditions for all of history because of the power food has over us. As with any practice, one’s relationship to it can be juvenile or mature.

I think I speak for most Western Catholics when I admit that we also want to lose weight during Lent. We never, ever admit it, often not even to ourselves, because it sounds so shallow and unspiritual, but in our most private, honest moments we know, and it gives us something else to repent. 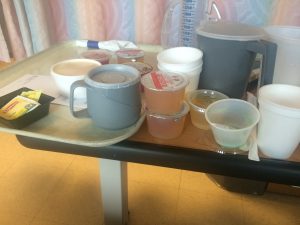 For six days in January I didn’t eat.

They weren’t all back to back, some were under medical supervision and some weren’t. That puts me at near 20% fasting for the month. I wish I could own to some deep spiritual purpose, but it was all in the service of making sure my colon didn’t rupture.

Though everything came to a head in January with my hospitalizations and surgery, my symptoms had been debilitating for nearly a year.

I had no appetite for months and I lost about twenty pounds. I became severely anemic and started passing out. Half of my hair fell out. I grew a garden and couldn’t eat its bounty. My dad, in his anger and fear told me I looked terrible and asked if I’d be able to eat at my own wedding. I wasn’t sure.  I threw up at five past midnight on New Year’s Eve.

I tried going gluten free. I tried cutting out nightshades. I took a break from dairy. I abstained from alcohol. I took fancy probiotics recommended by an acupuncturist who became aggressive when I told him I couldn’t pinpoint a trigger for my disease. I did all the things you do when you believe it is your fault you are sick.

I got over that and ate what I wanted, thought that was not very much, not very often. The rules had made me crazy. I was done blaming myself and I was done playing with my food.

As I heal from surgery I am on a boring, restrictive diet. Low fiber, low residue, the opposite of what one thinks is healthy. The last two weeks have been a blur of mac and cheese, saltines, pureed soups, peeled potatoes, pudding, and eggs.

Restricting my diet holds no spiritual attraction for me right now.

I’ve always done Lent intensely. I buy a new journal and commit to it every night. I give up drinking. I practice generosity. I pray the hours, and I don’t eat between meals.

Even with my other commitments, Lent will feel empty without the no-snacking rule. Such a rule would go against doctor’s orders to eat many small meals. I don’t believe restricting food would enhance this Lent, but perhaps I feel left out?

Perhaps this is another stage of grief, to lament that I can’t give up chunky peanut butter from the jar, since I couldn’t digest it anyway.

There is a possibility that this will be a spiritually fallow season for me. Unsurprisingly I have an emotional hangover right now. I have trouble being moved by much other than my own problems.

“Maybe instead of giving something up you could add something this year.”

That’s common wisdom among people like you and me who read spirituality blogs, but my fiancé doesn’t read any other than mine, so I was pretty impressed when he came up with that idea on his own. “Maybe you could add some more writing.”

“Yeah I was thinking about trying to post to my blog everyday.”

“Or maybe something more for you, not for the blog. Maybe a word goal every day for working on your book.”

Maybe. Except it feels like I am living the unexpected epilogue to the book I was working on. So that might take some time.

It’s all about time.

How do we use it? How do we make it special?

We mark out times and seasons and dress them up with practices that delineate them. If we are lucky we play a part in sanctifying what little time we are given.

It is so limited. So fleeting.

You make promises and commitments that seem so daunting and then POOF! It’s Easter.

You get carsick one day in the Berkshires and the nausea never quite goes away and then POOF! it’s three years later and part of your intestine is gone.

You start talking to someone on a train leaving Grand Central and then POOF! four years go by and he’s sitting in the hospital looking at your IV.