I’m not an expert on the Crusades, but that’s mostly out of spite.

Even before I became a Church History teacher, I learned that there were people who, upon finding out I was Catholic, wanted to interrogate and perhaps indict me for the Crusades. Once I joined the ranks of professional religious educators such curiosity was made more manifest. Frankly, it annoyed me, so I resisted learning anymore about the Crusades than I had to in order to teach my course.

Lest we get on our high horse and think this is unique to some other place, remember that during the Crusades and the Inquisition, people committed terrible deeds in the name of Christ.

Is a line like that something that would be recommended at your local Toastmasters guide to writing remarks? Maybe not. But it’s hardly the slander that some critics have made it out to be. Rather than going through their criticisms one by one, which would require me thinking about these people more than I want to, let me make a few general observations about the Crusades to give us all a little perspective. Here’s what you need to know about the Crusades (and history in general). 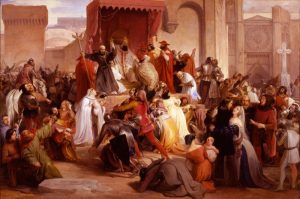 When Pope Urban II issued the call for the First Crusade at Clermont in 1095, he was not planning on kicking off nearly 200 years of battles, futile and self-sacrificing parades of civilians, and the massacre of basically anyone the western forces came across. He had a bunch of restless knights causing trouble all over Europe, and Jerusalem seemed like a safe distance to send them to burn off some energy. I doubt he would have been terribly bothered by the eventual outcome, but he certainly didn’t see it coming. When he sent them all off with a Deus Vult! the subtext was Deus vult that you get out of here and cause trouble somewhere else. And while you’re at it, control of the Holy Land would be nice.

I know this is a bit of an oversimplification, because the next thing you should know about the Crusades is pretty much the opposite of this “history is driven by individuals” hypothesis:

Conquering lands was something that everybody did for most of history. Perhaps the most risible “critique” of Obama’s statement is that the Crusades were a responses to “Muslim madmen” who were trying to take over Europe. Of course they were trying to take over Europe and Asia! Everybody was! Since most Muslim tribes were nomadic they were even more likely to attempt conquest. They’d been doing it since long before the time of Muhammad.

You know who else did that? The Franks. But because King Clovis converted in the late 400s and his successors forced those they conquered to be baptized or massacred, then they are not madmen? Excuse me for a moment while I laugh until I cry until I can’t tell the difference between the two anymore.

No one was out on the battlefield at Acre arguing about the nature of the Trinity.

Because religion can be a nebulous concept, and one we don’t always agree on, any conflict that involves identity is often labeled a religious conflict. The truth is, religion is just another distinguishing characteristic among battling sides that are driven by economics, greed, territorialism and all of the other yucky elements of human societies that drive us into conflict.

I don’t want to gloss over the uniquely religious elements of the Crusades: Crusaders were given spiritual incentive to go to battle, and many of those poor naïve pilgrims who tried to go to the Holy Land were going for genuinely spiritual reasons. But any fair assessment of why individuals or Europe as a whole did what they did in the middle ages cannot seriously argue that spirituality or even religious identity was the main impetus for warfare and other atrocities.

Judging the past is ridiculous, do so with caution

Question (asked with prissy, breathless outrage): “How could they do something so awful!??”

Answer: It was a thousand years ago.

Truthfully, I think the most interesting part of studying history is putting oneself into another era and evaluating how one would have handled a particular situation. I think that’s what makes the study of history fascinating and productive and is a really good exercise in creative problem solving for students.

But the habit that many get into of wondering why people and groups in history didn’t act more like us is deeply annoying to me. They’re not us. They had totally different priorities and worldviews.

This certainly doesn’t exonerate Crusaders from some of the horrific violence committed. But to be smug about that is, in a word, stupid. The world was different then. Examine and critique it to be sure, but if finding fault with medieval societies is your only avenue to the moral high ground, you have some thinking to do.

We are not doing too bad, so let’s keep working on it

Remember how I said Pope Urban II couldn’t have predicted what the outcome of calling for the Crusades would have been? It’s probably also safe to say that he wouldn’t have cared. You cared about “your people”, and outsiders were on their own. There was no handwringing about human rights or collateral damage.

So even though we fight too much and our world is too violent and extremism still exists and talking heads get paid to make people angrier and tribalism tempts us, the fact that we are even bothered by these things is amazing progress. It’s also an invention of the last few centuries.

For most of human history people followed the perfectly natural tendency to stick with their own kind. Through a combination of a shrinking world and soul-shattering atrocities, most societies have changed course and now include human dignity in some form or another in their unwritten lists of priorities. To repeat, this is new, and this is progress.

Yes, we can do much, much better, but let’s acknowledge that even attempting to do so is a revolutionary act. Rather than using the past as a reason to get riled up today, let’s look honestly at what the past was so that we can create a future that leads us closer to our high-minded goals.