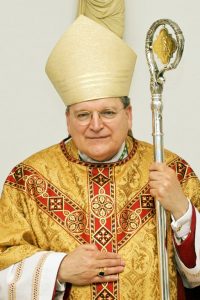 A few days ago a website with the title “New eMANgelization” published an interview with Cardinal Burke that touched on what they call a “man-crisis” in the Church. After reading a number of summaries and critiques of the interview, I couldn’t get some of its themes out of my head and decided to read the whole thing for myself.

This was a mistake, as it’s not really an “interview” so much as two men who already agree on everything having a lopsided conversation. In trying to identify +Burke’s worldview, so much was taken for granted in their discussion that I find myself missing some key points. I doubt +Burke would have said some of what he said – or at least in the way he said it – had he been interviewed on 60 Minutes. Perhaps that makes his statements more revelatory, if less clear.

What does he mean by radical feminism?

This was the big piece of the puzzle that I couldn’t quite wrap my mind around. I think the closest he comes to an answer is when he mentions “the dark confusion of gender theory”. So it sounds like the problem is that he believes in natural gender roles and characteristics, and things that radical feminism denies those things.

This is important because he ascribes problems with the liturgy and the family to said feminism. Without knowing exactly what he’s talking about, it’s hard to understand how he is making these connections, particularly in regard to the liturgy.

“Feminized liturgy” is a meaningless term.

At one point +Burke laments that there are too many women involved in the liturgy, but other than that he never makes clear what about the new liturgy has become “feminized”. He critiques (rightly, I will grant him) some liturgical trends that make the priest the star of the show, and then explains that “men don’t like that”. Two things are possible here.

+Burke has a list of things he has determined “men don’t like” which includes corny masses and doing things with women. When those things are present in the mass, it repels men, and therefore the mass is feminized.

One way or another “feminine”=all the bad things.

Maleness is normative in his ideology.

When women start to infiltrate ministry, the entire endeavor is compromised. But if men continued to dominate ministry, that would not be problematic. Can you imagine if I complained to him about how there were too many men on the altar and it had become to “masculinized”? I doubt he would ascribe any validity to his argument turned on its head. I’d be dismissed as a radical feminist and shown the door.

Men’s fear of women is not my problem.

OK, today it is my problem because I am thinking about it and it causes me angst, but otherwise I refuse to take responsibility for it. Boys don’t want to play with girls? Men don’t want to marry women who want equal rights? I got real problems, I do not have time for men who are scared of being around the ladies.

The notion of vocation is oddly absent.

It is likely that +Burke is of the mindset that “vocation” refers to being called to the priesthood and vowed religious life, but I still found it peculiar that in a discussion of participation in ministry vocation did not come up.

Disclosure: My fixation on this comes from my personal history: participation in the liturgy is one of the first things I ever recall feeling “called to”. My young soul had a vocation to be an altar server, but I wasn’t allowed to because I was a girl. This was a formative experience for me.

In my mind, if a person is truly called to participate in the liturgy, they will do so despite a dislike of the pastor or a frustration with the “sloppy” celebration. But +Burke lists such obstacles as perfectly valid reasons for people not to become involved. It is not that men have to suck it up and get involved, but that the Church needs to change to suit them. (Again, imagine if someone made the same argument but replaced ‘men’ with ‘women’.)

Female does not always equal feminine.

+Burke’s persistent implication that the presence of females makes something feminine seems to be the biggest cause of confusion among readers in my peer group. To return to the question of what feminine means, does it mean here Stereotypically Feminine?

Put it this way: If you put me in charge of a church and I ran it without much self-reflection and simply according to the inclinations of my personality, it would be stereotypically masculine: centralized power, brusque leadership, lack of adornment. It would likely also feature some of the things that +Burke insists men respond to such as “rigor and precision and excellence” (why he thinks women don’t respond to such things is a mystery). But because I am a woman, would the environment be ‘feminine’? Or is my example inappropriate because a. women shouldn’t lead and b. I am a disgusting freak of nature for not being more nurturing?

After reading the whole interview, highlighter in hand, it was obvious that this was conversational rambling rather than a well-organized treatise. I still think it is worthy of critique, because it reveals one ideology that is present in the Church. We are in danger when we allow ourselves to be blind to ideology – any ideology, including our own – and let our framework for how the world should work steer us without knowing that’s what we are doing.

I believe that our Catholic faith is more than an ideology, and calls us to more than silly simplistic claims about boys and girls. The reality of human complexity and the mystery of the divine will are always ready to smash our frameworks and call us into something more, if we are not afraid.