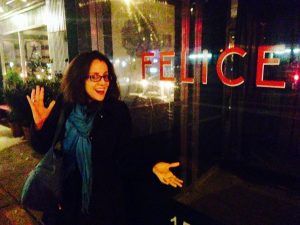 A year ago I embarked upon what I referred to in good humor as my “Jesus year”. Being 33 in the 21st century is far different from being 33 in first-century Palestine, but I couldn’t resist making the comparison. I told everyone, again in jest, that I simply hoped to have a better 33 than Jesus did.

As it turned out, I did, but just barely.

I woke in the night and threw up a few nights before Christmas, kicking off a Crohn’s flare that dragged on through the summer. I refused to give up on my plan to work in Africa in August, so my doctor wouldn’t suppress my immune system (the most effective treatment for my ailment) and I dragged myself through the spring and summer not sure how I would feel on any given day.

For most of the spring I napped at every opportunity. I did a two-month gluten free trial, and my love and I developed some smooth choreography that involved him letting me out from behind him in the communion line so I could receive from the cup alone without making a big deal about it.

I kept up my commitments, unwilling to bend to the unpredictability of my health. I sang masses even if I had to sneak off to be sick during the homily. I hauled timpani around late at night while it felt like I had a hot brick in my stomach.

I had to go to the hospital once, and when I came home I learned that my godmother had died.

We visited Assisi again and I came home with a diamond ring and a Mozart role on my resume. On my second international trip of the summer I learned that Zambian food agreed with me. After my return malnourishment and anemia caught up with me and I started getting dizzy often, especially when I sang. During one vigil mass I had to stop singing the communion song and lay down on the floor of the sacristy while the organist continued to play.

When attending mass as a “regular person” (ie sitting in the pew, not singing) I had to sit during the Creed. I couldn’t stand for that long.

I tried to write. I finished an iBook for my classes titled “Christianity: The First 500 Years” and am still finding typos in it.

I learned how pain can make you a lunatic, taking over your brain.

I broke into a million pieces and didn’t even know it. I forgot who I was and found myself again. I became a new person, refined by the fire of brokenness and determined in the face of my own human fragility. This, perhaps, is something to which Jesus could have related.

I review this year and see “I, I, I” and my own selfishness shames me. Perhaps you read that and agree – you are bored with my self-centeredness. Perhaps you read that and you smile and shake your head, thinking “It’s OK, Margaret, you were sick, it is allowed.” My own inner voice sways between those two poles. Drive for self-improvement is an unshakeable part of who I am, and it would be truly shocking if illness conquered that ambition.

When I look outside of myself I see all of the people who loved me through this crisis. My coworkers who covered for me, asked me questions and prayerfully worried. My friends were patient when I went off the grid for a while. My parents and brother gave me the best pep-talks they could. And my dear, heroic, phenomenal fiancé took care of me when I needed it, stayed flexible though he didn’t know what sort of person he would find from day to day, and agreed to marry me though the unknownness of the future is particularly vivid in our story.

And of course there are you, my dear readers and friends, who have encouraged me, advised me, and been with me during this difficult year. I am deeply grateful.

Today I embark upon 34. I don’t dare to hope for or predict anything, but I know there will be love. Thank you for staying with me.