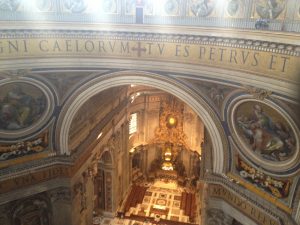 Sometimes it is hard to say “here comes everybody”.

James Joyce’s famous description of Catholicism rang in my ears as I read a follow up by Ross Douthat on the NYT blog to his recent suggestion that Pope Francis is leading us all astray. In this second piece he explains that he is Catholic

for various contingent reasons (this is as true of converts as of anyone else), but on a conscious level it’s because I am a mostly-faithful Christian who is mostly convinced that Roman Catholicism is the expression of Christianity that has kept faith most fully with the early church and the words of Jesus of Nazareth himself.

This reason is almost painfully intellectual: no mention of the affective, no mention of relationship. Even he admits that is not his *only* reason for being Catholic, so I’m willing to posit that perhaps some of those have to do with our experience. Perhaps some of his “reasons” move into the realm of irrationality, as mine do. Frankly, I’m not terribly concerned with judging him, but what I will note is that there would be little chance of us finding common ground regarding our approach to religion.

The same day I read Douthat’s piece I was reminded of a mailing I received a few years ago from a Catholic student group titled “Documents on the War on Catholic Youth and the Church”. This  letter announced

The advocates of secularism and godlessness are targeting America’s youth and the Catholic Church just as carefully and heartlessly as an insurgent points his rifle at an enemy soldier.

Could this approach to faith be more different from mine? Likely not. Occasionally I feel embattled by the world, but I don’t think the world is coming after me on purpose, and I certainly don’t revel in my victimhood or try to get people riled up about imagined persecution.

And yet these are my brothers and sisters in faith. Even if they weren’t Catholic they would still be my spiritual siblings in the world, and this can be so hard to live with. I cannot merely love those who agree with me, or those whose ideologies line up with my own. Jesus says love everyone, no exceptions. So I try.

Who do you find difficult to love, and how do you open your heart to them?