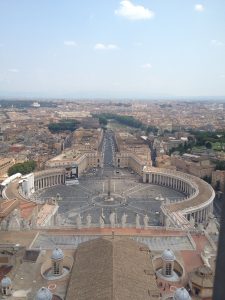 The Bishops’ Synod on the Family, taking place these last few weeks in Rome, has thrust into the spotlight not just Catholic teachings and practices regarding family life, but also how the Church conducts her business and “manages”, so to speak, her teaching authority.

The biggest bombshell has been the relatio post disceptationem, a document released (in a painfully clunky English translation) to summarize the conversation that has happened so far at the Synod. Although this does not come close to carrying the weight of law or authority in the Church, it has set off a firestorm because it dares to talk about homosexuality and divorce. But that’s not where I want to start. Let’s begin with paragraph 4.

In the light of the same discourse we have gathered together the results of our reflections and our dialogues in the following three parts: listening, to look at the situation of the family today, in the complexity of its light and shade; looking, our gaze fixed on Christ, to re-evaluate with renewed freshness and enthusiasm what the revelation transmitted in the faith of the Church tells us about the beauty and dignity of the family; and discussion in the light of the Lord Jesus to discern the ways in which the Church and society can renew their commitment to the family.

Though I wish the translator had used the same part of speech for “listening, looking, discussion”, I still think that is a powerful summary of the work of the Synod. We must consistently evaluate the lived reality of people, we must critique both that cultural reality and our pastoral response, and we must discuss how share the light of Christ in our context. All of these are another way of saying we must discern the signs of the times.

The last activity, discussion, is where I want to focus. Discussion can be scary, especially in a community that is called to love and understand one another. As a Christian, it is my duty to open my heart, to listen to what others are saying and respond to them in a loving way, even when I disagree.

There has always been a strand of Catholic culture that wanted to eliminate discussion of certain topics. This was particularly evident during the papacy of Pope John Paul II, who declared certain topics “off limits” because the Church had already had a final word. On Twitter this week, I was sternly rebuked by a stranger for being pro-Synod because “the Catechism already has all the answers” so why would we need to talk about them?

Readers of this blog are literate enough to know that the most recent edition of the Catechism was published in 1995. Preparing the Catechism must have involved extensive – dare I say it? – discussion. It will be updated again in the future, no doubt. So while core teachings do not change, the way we express them and apply them will modulate as time goes by. We can have these discussions without throwing out core teachings. It is irresponsible to try to preserve our religious world in amber while the world changes around it (again, see “signs of the times”).

This latest discussion hit a few key points that I want to highlight:

The collection of issues they deal with here is quite the smattering. Domestic violence, cohabitation, divorce, civil marriage, weak marriage preparation, use of birth control are all touched on. My list is not comprehensive, and frankly neither is theirs. But they offer a realistic start to challenges to the family. My hope is that the final document will place these all more clearly in framework of theology and pastoral response.

I had a professor once whose initial response to a question about cohabitation was “well, there’s shacking up, and then there’s shacking up”. I was reminded of this in paragraph 7, which clarified that not all cohabitation before marriage is “cohabitation not orientated towards assuming the form of an institutional bond”. Again, this does not mean that the Church will sanction one and not the other – both are still out – but shows that they are looking and listening.

“The complex social reality and the changes that the family is called on today to deal with require a greater undertaking from the whole Christian community for the preparation of those who are about to be married” (34). This does not just mean that we need to improve the two-day workshop that many couples attend, though that is mentioned and could certainly be prioritized. The document mentions a few trends in our “social reality” – narcissism, individualism, solitude – that challenge the Catholic ideology on the family. Speaking plainly, they assert that “many [couples] remain in the early stage of emotional and sexual life” (10). This is a challenge that needs more of a response than can be found in pre-Cana. The Church – both as an institution and as individuals – needs to always be guiding people toward a mature understanding of relationships all the time.

“Various Fathers underlined the necessity to make the recognition of cases of nullity more accessible and flexible”. The larger pastoral conundra regarding divorce is not going to go away, but the Church can certainly find ways to minister better to those with broken marriages. Most people view annulments as convoluted and, even worse, as pay-to-play. Let’s change that.

Paragraphs 50-52 have certainly caused the most hullabaloo. Just like the statements on divorced Catholics, I think this section is most representative of the Bishops’ movement to address the pastoral reality present in parishes (at least in the West). If you think this question doesn’t come up day after day for those of us in the trenches, you are delusional. If you think we should avoid the discussion you are too late, because it is already happening. And if you think an appropriate and thorough pastoral response to challenging questions on issues of sexuality and inclusion, many of which come from a place of great pain, is to shout “READ THE CATECHISM” and walk away, then I really don’t know what to do with you.

The relatio is not perfect, but for those of us who wish we could be flies on the wall at the Synod, it is fascinating. It has prompted controversy and disagreement; provided these are done in a spirit of charity I am all for them. You only disagree about things you really care about, and people don’t often get fired up about Church doctrine and practices.

This is exciting. The sky is not falling, nor is the Church being turned on its head. We are dealing with the most intimate and senstive matters in our lives; of course the conversation is going to be challenging, but it doesn’t have to be toxic. We are going to be fine. I trust in the Spirit to guide the Church as she has done for millenia, and I trust in the Church to have prudent yet daring conversations that read the signs of the times. Be not afraid. Let’s keep talking.