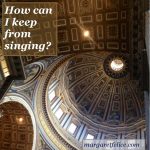 Featuring the work of Elise Valerio in the How Can I Keep from Singing? series of guest posts is a special treat for me, since Elise is new to blogging, so we can say we knew her when! I had the pleasure of working with her on a production a few years ago, and it’s great to read that we share a favorite piece: Vivaldi’s Gloria.

I am, admittedly, a relative newcomer to the world of religious music. Up until 2006, other than the hymns I heard at Mass, my only knowledge of it was G. F. Handel’s great oratorio Messiah. No joke. At that point, I became involved in the liturgical choir at my college at the urging of a friend who was also part of it. This broadened my knowledge of music used in Mass settings. Even at that, the music to which I was exposed was in English. Beautiful, sure, but I wasn’t quite moved by it. Let it be known that I was in a general spiritual and religious slump at this point, so this was somewhat understandable.

It was not until graduating and joining a choral group in my hometown that I got my first serious taste of “Latin with a beat”. In a program alongside Purcell’s Te Deum and Jubilate Deo, I had the privilege of singing Antonio Vivaldi’s Gloria (RV 589). Though I have little recollection of the Purcell pieces – even now, listening to other choirs’ recordings of them, I draw a blank and the words seem new to me – the Gloria has stayed with me to this day, nearly six years later.

Vivaldi broke his composition of the hymn into twelve segments, each segment having its own ‘mood’. This had baffled me at first because the settings (in English) which I had heard at Mass were fairly consistent in their sound, whether in major or minor key. This made sense to me because the words struck me as all being of the same thought. However, as I rehearsed Vivaldi’s composition with the choir, I learned to appreciate the qualities of each segment – changes in tempo, dynamics, and even major/minor (from one segment to another, not within a segment itself) – and I realized that his choices were quite brilliant.

Not only had my knowledge of religious music up to this point been in English, but my knowledge of classical music (other than the aforementioned Messiah) consisted mainly of secular pieces. To use the vernacular, hearing Vivaldi’s Gloria was a real game changer for me. It took me a couple of weeks of rehearsal to really get into the feel of the piece, because I had trouble with some of the harmonies and rhythms at first. As the rehearsal period progressed, however, I felt something awaken within me. I no longer viewed the hymn as “just another part of the Mass”. It’s not a bore at all, and I feel somewhat ashamed for ever having thought of it that way. Today I consider it a sort of stumbling about blindly and then regaining (or, in my case, gaining altogether) vision.

In rehearsing this piece, I learned that the text of the Gloria – meaning in the settings I hear at Mass, not in Vivaldi’s composition – has many more nuances than I had originally believed. Now, every Sunday (and any other Mass I may attend) when we reach that part of the liturgy, I recall the artistic choices that Vivaldi made when differentiating each section and they help me truly feel the music and the words. The repetition of word phrases within Vivaldi’s composition reinforces the overall meaning for me as well. I get the sense that I’m more a participant in the Mass than a disaffected observer. My only regret is that it took me eighteen years to come around to this, but I could not pick a better catalyst if I tried. 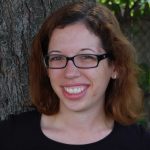 Elise Valerio is a student-care instructor in Belmont and a religious-education teacher at St. Columbkille Parish in Brighton. In her spare time, she participates in local community theatre (which is how she met Margaret in the first place), the occasional ceili, and the even more occasional dance class.