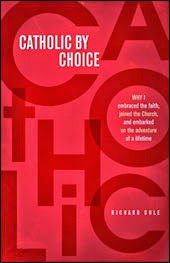 Today I’m hosting the blog tour for Richard Cole‘s Catholic By Choice, which I reviewed in last month’s book roundup. Richard was kind enough to answer some questions I had about his writing, conversion, and religious worldview.

When I was growing up, I didn’t write much at all; I drew and painted. I never took any writing classes, but I studied with a number of art teachers, working with pencil, pen and ink, pastels, and watercolor. I only started writing seriously when I was in grad school. That might be the reason why a poem to me is usually a sort of painting in my mind – a cluster of images that “talk” among themselves, the way a painting works. Most of my poems occupy a single page, partly because I want to see the poem the way we see a painting – right there in front of us, all at once. I’ve only written one extended narrative poem, and, not surprisingly, the story was told as commentary on a series of photographs. I tend to write poems slowly. Lots of tiny stitches.

The memoir, however, was written in a gale, about ten months from start to finish. Some revisions later on, but most of it done in a single period. When I started writing, I knew I wanted a straightforward story written chronologically. Man goes to monastery. Man enters the church at the end. Pretty simple. The question wasn’t whether I would join the church but what happened along the way, how the conversion was affecting me, my family and the people around me. As I was writing the book, I noticed that I was following the same process that I use in writing a poem. I usually start with an image, a title, or maybe a first line. Then an ending volunteers itself. In between might be a bunch of other images, phrases or thoughts. So the poem becomes a matter of how to get from the beginning to the end. That’s where the real work comes in, the happiness. In the same way, the memoir began with a definite point A and ended with point B. The dramatic tension wasn’t where I was going but how.

On the other hand, when it comes to a book of poems, not an individual poem, I have no idea of the ending until the book is finished. My last two books of poems have been shaped with a definite narrative arc. The voice changes as the book evolves. However, the change that determines this overall shape isn’t something I’m able to foretell. I have to live the poems as I write them. It’s like Roethke’s poem “The Waking” where he says, “I learn by going where I have to go.”

What advice would you give to anyone entering the Church this Easter?

Have fun. Really. Be happy. Entering the church is solemn business but it doesn’t have to be somber (unless you’re really into somber). As Christians, certainly Catholic Christians, we’re in the joy business. We are the bride of Christ, and Easter for the candidates and catechumens is a wedding, a joyful event.

One characteristic of Catholicism is finding God in all things, in the present world. What are some of your personal sacramentals, objects that have particular spiritual significance?

Years ago when my wife and I lived in New York City, before I had any thought of joining the church, she bought me a Catholic medallion of the Holy Spirit – “Fill the hearts of thy faithful and kindle in them the fire of thy love.” I’m wearing it now. I also wear the shoes of my father-in-law who passed away a few years ago. It turned out that we have the same shoe size. Walking in his shoes, literally, helps me feel closer to a man I always respected and loved, as difficult as that love might have been.

You can purchase Catholic by Choice in Kindle

Disclosure: This post contains Amazon Affiliate links. Purchases made through these links send some change into my piggy bank at no cost to you.