March came in like a lion and out like a lion, drenching New England in snow and freezing rain . This busy month found me reading backstage at concerts, during breaks at rehearsals, and walking down the street on our few temperate days.

Colum McCann uses language in a fascinating way, and writes riveting prose. I didn’t read Let the Great World Spin, his acclaimed novel that preceded TransAtlantic, but now it is certainly on my list of things to read. This most recent book spans multiple eras in North America and Ireland. The last 25 pages or so in which he tries to tie everything together were a little strained, but the book works as a series of vignettes.

Pope Francis: Why He Leads the Way He Leads

I posted my thoughts on this book earlier this month. I know many of you were reading along with me and I’m eager to hear your take!

Notes from a Blue Bike: The Art of Living Intentionally in a Chaotic World

Tsh Oxenreider has mastered the breezy, self-helpy style that sells like hotcakes while urging everyone to simplify and “live intentionally”. I really enjoyed the book, which I won from Preston Yancey’s blog. Oxenreider’s life journey has been fascinating, though perhaps not as simple and slow as the life that she is advocating. She walks us through her efforts to simplify, but the uniqueness of her story (extensive world travel and making a living as a blogger) makes it difficult to relate to some of her struggles. She does her best to address the issue of money in an appendix, which I thought was the best part of the book.

This is Where I Leave You: A Novel

From time to time I read bestsellers just to see what makes a bestseller. This book was lying around the faculty room and I knew I could blow through it in a few days. As with many books of this type, I was glad I only spent two days on it. According to the reviews this is a “window into the male psyche”, in which case I resign from the human race.

At first I was overwhelmed by the silly, commitment-free sex, but I realized that was just a distraction from the real fantasy of this book: a world of gratuitous punching. Everyone punches and is punched in the face. Having never seen someone punched in the face in real life, I have to assume that a dozen or so punches in a 250 page novel is extreme.

Another peeve: overuse of the word “toned” to describe women’s bodies. As if describing women’s bodies wasn’t skeevy enough, use of the word “toned” really makes my gorge rise. Even by the end of the book I couldn’t remember which of the clumsily drawn female characters was which. Most of them were caricatures with five letter names ending in “Y”.

I never got a strong sense of place in this book either. I guess you can take out all of your description and put in punches, and that makes a best seller. I stayed with this book to find out what happened to the characters, and even that was a let down. In short, yuck. I only provide the affiliate link so that you can click through and buy something by Gloria Steinem.

[One compliment: whoever did the cover design was right on the money. As soon as I picked it up I knew that the book would be a poor man’s Royal Tenenbaums.]

Catholic By Choice: Why I Embraced the Faith, Joined the Church, and Embarked on the Adventure of a Lifetime

Richard Cole’s lovely, honest spiritual memoir was a good read (especially after rage-reading the previous book). His unsparing self-awareness strips the sugar-coating from his conversion story and makes it much more than the same-old. As a lover of liturgy, I really enjoyed the way he writes about his attraction to the Mass and the Eucharist with an outsider’s perspective. If you’re looking to round out your Lenten reading, I highly recommend this in paperback or Kindle. 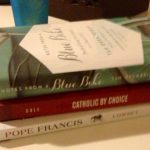 Have you read any bestsellers lately? Did they live up to the hype or leave you wondering why they were so popular? What did you read in March?

Disclaimer: This post contains affiliate links. Purchases made after clicking through these links send some change into my piggybank at no additional cost to you