According to the pictures that are occasionally taken of my insides, the main problem I run into with my Crohn’s is when inflammation causes some blockage which slows down my digestion.

That’s not really the kind of blockage I’m thinking about today – or perhaps it is, since I’ve been able to think about little else during the painful past weeks. My middle has been aching, I have a weak appetite but am famished, and I am exhausted by dusk. And when dusk falls, though it’s a bit later every evening, the freezing temperatures that plague us through the daytime take on a deeper chill, and I don’t want to move.

Which is to say I’m not writing much. A flash of inspiration at mass on Sunday night had me racing home to write it out. As I huddled under afghans, waiting for the heat to kick in while wearing the sweats I had run through the dryer before I put them on, my words and pen danced around the outside of what I wanted to say, and I felt lame for not being able to capture the magic that had occurred a few hours earlier.

I have written, which I never expected to do when I started a travel blog five-plus years ago. In the thrill of discovering my authorial voice I thought that ease of expression would last me forever. I have learned that there are fallow seasons, and that there’s no such thing as writer’s block, just a failure of daring and effort. 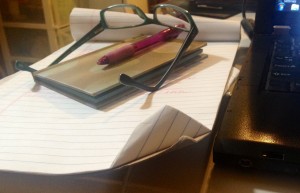 Sometimes you just have to sit down and write, which is exactly what I’m doing, because another round of snowfall has given me a morning at home.

It is peculiar for me to be quiet, to not have an opinion I’m dying to share. I have survived more shocking peculiarities. I know I will survive this one too.

When you feel unproductive do you force yourself out of it or lean into it? How do you survive the winter blahs?