Today is the Feast of St Ignatius, and that matters to me.

It matters to me because I quite by chance I ended up at a Jesuit college which has since affected everything in my life. It’s hard to find anything I do, from the moment I wake up until the moment I go to sleep, that is not related to my experience at Boston College.

Since then, I have stayed in the Jesuit orbit, working at their churches and schools, reading their books and attending their lectures. Last year on the Feast of St Ignatius I conducted a choir at a festival liturgy as part of an International Colloquium on Jesuit Secondary Education, and was rewarded with a cookie with St Ignatius’ face on it. 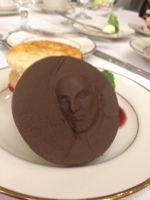 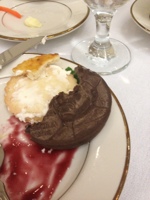 There are many anecdotes from the life of Ignatius that highlight his character: his lusty, ambitious youth, his injury and the role of imagination in his recovery, that he learned Latin with school boys, that he was devoted to his friends.

The detail of his life that has moved me the most is not about dramatic conversion or spiritual exercise: it is that he resisted being named Superior of the Society, and that he finally surrendered to the will of the community.

This willingness to meet the needs of the people around you, even if it doesn’t suit you, is the trait I would most like to emulate. It’s what Ignatius was doing when he agreed to start one school, and then another, setting the course of the Society on a much different path than what had been intended.

To identify these needs, we need to be devoted to reality, to seeing things as they truly are. This has been the greatest spiritual gift I have been given during my time developing what could be called an Ignatian Spirituality. I have learned how to look at the world, and to not  spare my eyes from what they might behold.

By learning to look, I’ve seen my stubbornness get in the way of God’s grace. I’ve seen God in people I was determined not to like. I’ve seen my own creativity as a participation in God’s creative work. I’ve seen need which I could alleviate, and that which I couldn’t. I’ve seen systems that need repair and communities that build up the Body of Christ.

I’ve seen many things that absolutely delight me. I have seen that God is delighted by these things as well, and even that God delights in me.

Happy Feast of St Ignatius. May you be delighted, and revel in your own delightfulness.