Running in flip-flops is never a good idea, even if one is running to catch the bus.

In my case, I wasn’t even running for the right bus, but since the sign on the back where the route number usually goes was covered with the slogan “Boston Strong”, I didn’t know that until an off-duty driver at the stop, seeing my shuffle, called out “You want the 7??” I did not want the 7, so I stopped running and caught my breath.

It wasn’t long until the right bus pulled up. I greeted the driver, who did not greet me in return. Maybe he thought I was rude for leaving my sunglasses on inside, but I was balancing bags on each shoulder and could barely free enough fingers to get out my bus pass. The off-duty driver who had helped me out earlier got on behind me and started making small talk with the driver who was working.

As they chatted we took off forcefully from the bus stop just before I reached the nearest open seat. I used the balance skills that are unique to regular bus riders, honed during years of commuting to the Back Bay when I was in conservatory.

This was the tail end of a whirlwind weekend. It had begun with a suburban sitzprobe rehearsal, then I headed to a remote South Shore town for a wedding, and the next day I was in Manhattan for the finals of an opera competition I’d advanced in. I’d hardly known where I was for most of the weekend, and my disorientation was only aggravated by literally walking into the middle of a first communion procession at the unfamiliar parish we’d found for Sunday mass. I’d hit four states in 24 hours, and had spent the last three hours on Amtrak.

When the driver started speeding through the city I didn’t mind a bit. At least I’ll be home soon, I thought. I knew it might take a moment to load everyone on at the major station near my house, but how long could that take? There was a small group waiting at the curb when we approached, but when the door to the bus opened, no one got on.

The bus lurched to the right and the alarm alerted us that the ramp was coming down. One of the women waiting was on a motorized scooter. While we waited for the ramp to unfurl and the bus to tip toward the sidewalk, the off-duty driver rushed to arrange the fold up seats to accommodate her.

I could hear her through the open door, apologizing to the other people waiting to get on, explaining that sometimes people get annoyed, even as those nearby assured her that it was OK. She came on and let the driver buckle her scooter in place. The off-duty driver remembered at which stop she usually got off. He smiled at her as he told the driver to take good care of her before he got off and went into the subway.

Everyone on the sidewalk waited while the ramp was folded back into the bus. About five minutes later, we were on our way.

On a less graced day I would have found an acceptable reason to be annoyed by the situation. I would never have allowed myself to be irked at the passenger herself: that’s simply not done. But I would have indulged the feeling that I was having my time wasted by finding someone else to blame and I would have huffed and puffed while I waited for everyone to be ready to go.

But instead of huffing and puffing I breathed freer than I have for a long time. My time isn’t that important. I am not so important that I need to get from one place to another as quickly as possible. I am certainly not more important than my neighbor who has to ride the bus with her scooter.

No one else on the bus was annoyed either, from what I could tell. We just waited in peace, catching our breath while the bus sat at the curb. It was magical.

A few minutes later we were back to normal, with the driver slamming the breaks after a passenger shouted to him that someone was chasing the bus. He let her on, shouted at the passenger who asked him to stop, got in an argument with the girl who had boarded, she got off in a snit after realizing she was on the wrong bus, after which the driver announced “everyone thinks they can do this job better. If you want it, you can have it!” It felt like Boston again. 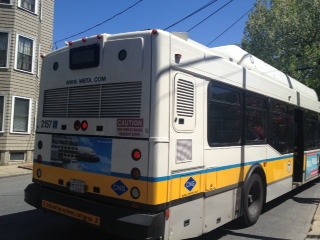