I am not embarrassed to admit that October 27, 2004 was one of the best days of my life (not the very best, mind you, but it was up there). I had been sick for most of October, and had listened to the majority of the playoffs on the radio, in a dozing haze of cold meds. But I made it out that Wednesday night with my two closest buddies to the local bar, where for that night they only served drinks in plastic cups, and during the seventh inning they took all the chairs away.

And then they won. The Red Sox won the World Series. everyone was jumping and screaming and hugging, but what I remember most was what came next. At least among my friends, we all retreated to call our families. We all knew someone who had waited a long time for this, at least longer than the twenty-something years we had. And we all had someone who had taught us how to love the team.

One friend’s 90-year-old grandmother went out on her suburban porch and screamed into the night. My mother tried to convince my brother to take a drive around the neighborhood beeping the horn. Other friends and family, at that late hour, got into cars to drive into the city to meet us (no one should be surprised that more than a few bars stayed open longer than was ordinanced in order to host victory celebrations).

The next morning my mother took a copy of the newspaper to her father’s grave. And during the victory parade, after waiting hours in the cold and damp, after my brother and I argued at length over which of us Jason Varitek made eye contact with, it was Johnny Pesky riding by that made my mother lean her head against my brother’s back and tear up. 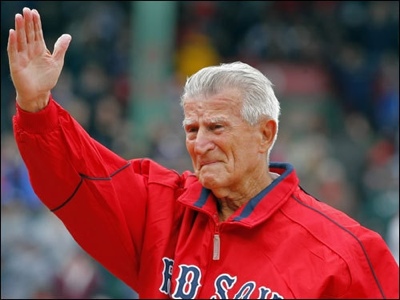 When I heard the news yesterday that he had died, it flummoxed me a bit. People who loved the Sox loved Pesky, and there was something so positive about him that sometimes he seemed an icon of all that was good with the Red Sox. And like all good traditions he held generations together. RIP Johnny.