I had what I thought were some pretty good reasons for being distracted at the vigil mass. We had been traveling for what felt like an eternity, driving from New England to Indiana to visit my brother. The Cathedral we were visiting was gorgeous, but sticky, and the weather outside was steamy enough that even the muggy sanctuary had initially felt cool when we entered.

At the Cathedral they sang all the responses, which kept me a little more alert than I might have been otherwise. I followed along with the readings and sang along with the psalm. But I was still drifting. During the prayer of the faithful I snapped to attention when they prayed for rain.

Not just for rain, really, but for an end to the drought that has done a number on much of the country this summer. Even though I haven’t been personally affected by it, that prayer really moved me. Rather than the abstract needs we often pray for in flowery language at our liturgies, this was a real, concrete, desperate need.

Such prayers are pleasing to me from afar. But I do not like to pray that way. I imagine that I have no such pressing needs, but of course I do. I try to hide them from God. I fear it would be selfish to unload the contents of my heart when others needs are so great. I spent much of the last year trying to hide my wants from God, thinking that asking for what I wanted would be unseemly.

Until one day I broke open, and realized I could not hide from God, that God already knew my wants and needs. I gritted my teeth and willed my prayer towards heaven with all my might.

And that is what the community did just before the Liturgy of the Eucharist began on Saturday afternoon. I joined my heart with theirs and prayed for rain. By the consecration the sky had darkened so that the stained glass windows looked black. When we opened the doors after the final blessing rain was pouring down in sheets. But there was sunlight still in one corner of the sky.

The rain let up for a bit, which allowed us both to get to our car, and to believe that we would still be able to see the baseball game for which we had tickets that night. We met up with friends of my boyfriend who had driven from another state with their two pre-schoolers to join us for the minor league game, and got to the park early enough that we could claim a picnic table near kids’ bounce-house and rock-climbing wall.

Our tickets were good, but we thought the table would be a better spot for us (and the little kids) to enjoy some of the stadium’s notable concessions. The air had cooled from the rain. The game started late due to the rain, and in the middle of the second inning the clouds turned ominous again.

The PA announcer told us to seek shelter, so everyone hustled to the covered area of the concourse where we packed in next to each other like sardines. The drops started off thick and infrequent, and quickly built to drenching storm. I joked that I wish they had waited until the morning masses to pray for rain. A man standing near me in matching team cap and t-shirt said “You prayed for rain tonight?? Could you pray for me to win the lotto?”

I called my brother, who was working at the game, to see if he could get us up to a reserved (enclosed) area. Good sibling that he is, he got all six of us to somewhere dry. Eventually, the game was called off because of the intensity and length of the storm. We sat up at a table overlooking home plate, and watched the rain fall, laughing while the kids told jokes and the old friends told old stories. The game was to have concluded with fireworks, and they were set off after the game was called, despite the rain. Streams of light shot beautifully into the cloudy night. 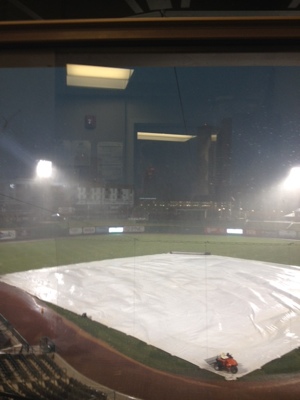 I do not know how prayer works.

I know that my discomfort with praying for my wants is not just that I think it is unseemly. It is because I am scared I won’t get what I ask for, and that the weak trust that I pretend is faith will be shaken too much for me bear. It’s easier to handle being denied the things I haven’t asked for.

That’s not the agreement that God and I have. I don’t believe that God wants me to hide my need so as to avoid disappointment. Neither do I believe that trust in God means that I will never be disappointed. My plans are not God’s plans, this much I know. But that is easier to believe when the plans I am begging to accomplish are far from my heart. When they are close, I want to keep them safe so that when they are thwarted I have no one to blame or be angry at.

The storms followed us back to the East Coast all day the following day. The sky was dark as night at 8 am when we passed through Toledo, and we saw sun for about 45 minutes the rest of the 12-hour drive. Rain slammed us again in Ohio, twice in Pennsylvania, and finally as we were taking the suitcases out of the car.

It slowed us down, but I was content in the passenger seat, next to someone I love, having just left my dear brother with promises to see him again soon. For a second, I had everything I wanted, and the quiet pervasive prayers that have been running around inside my heart for months were still. I knew that peace and satisfaction weren’t to last very long. So too did I know that just once, in a way I could understand, God had answered our prayers.