Once my student acupuncture interns found out that I was game for anything and never complained, they began pulling out different techniques with every visit, determined to practice every trick in the book on their guinea pig. I’m pretty tough, plus they laugh at all my jokes, so I went with each new twist for the sake of my health and their learning.

On rare occasions I wince, although most of the time the swift motions of the female student don’t even feel like needling. When I do feel some “sensation” from the needles, I try to be discreet. The students commented on this during one of my recent visits; apparently some people are very vocal and not too kind when something feels unpleasant.

“I volunteered to have you stick needles in me,” I explained. “I can’t exactly get upset when it feels like you’re sticking needles in me. Really, I can only marvel when it doesn’t hurt.”

They laughed, as usual, and turned off he lights and left me to lay there. I started to weep. Maybe that’s what life’s like. I can only marvel when it doesn’t hurt.

I spent the last month preparing resources for liturgies in three different languages, chasing down French missals and Spanish Gospel acclamation verses. Today was the last day of the global conference for which I was liturgical coordinator. Before most people were out of bed I was helping priests from Chad and Cameroon find just the right stoles and being reminded of how bad my French is.

When it came time for the Priere Universelle, the priest from Cameroon, who had delivered a homilie that managed to be both impassioned and slow enough for me to comprehend, started singing a response. Judging by the singing from the assembly, this sung prayer is customary in at least some of the French-speaking countries.

Able to figure out most of the text, I sang along from my post beneath the large lovely crucifix before which I have prayed a thousand times. Even though I was exhausted from a week of early liturgies, I felt that surge of energy I get any time I come upon a hymn or practice I have never experienced before. The surge says “there’s more out there for you to learn”. It says “you are living the life you want”. 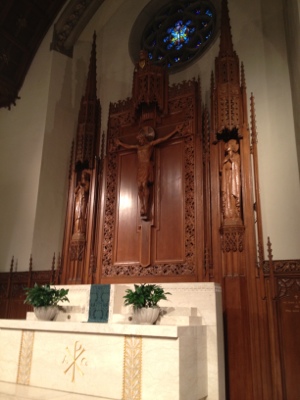 During the communion procession, after making sure everyone had everything they needed, I went to the grand piano and started to lead a Taize hymn. Taize seemed a perfect choice: simple, multicultural…and the only piano parts my clumsy fingers can play.

The assembly picked it up. From the corner of my eye – I don’t dare look away from charts when I struggle to play piano – I saw coming toward me a conference participant from Hong Kong who had sung for our festival liturgy the night before. He skipped up the altar steps behind the ministers and eased onto the piano bench next to me, beginning to sing a harmony. After one iteration of the 8-bar refrain, knowing that he is an organist, I slid away from the center of the bench so he could play.

He played and we both sang. Confitemini Domino quoniam bonus, Alleluia!

That’s when I knew I was wrong. Life is about more than marveling when it doesn’t hurt. Life is good, good good. Often we have to go looking for goodness, or at least show up in the marvelous places where goodness can swirl into a cloud in the air. Joy is not just something that pops up when the pain stops. It’s in the air. It’s in my voice and my prayers and my heart.