“So…how do you deal with being Catholic when they won’t let you lead?”

That question, particularly sigh-inducing, is one I get frequently (along with “What about the Crusades?” which is often asked when I admit to teaching church history – uh, they were bad??). Why does this make me sigh?

Because I help kids learn how to pray. Because I have theological chops and am seen as a religious authority by some kids, some adults. Because last night I conducted a choir at a festival liturgy that I coordinated. I wrote the prayer of the faithful, I decided what would be spoken or sung, I made sure everyone knew what was going on. Is that what not leading looks like?

A few months ago I won a book that Leigh Kramer at HopefulLeigh was giving away. I was eager to read The Resignation of Eve because it dealt with two of my favorite topics: gender and religion. It dealt with them, however, among Christian groups that are not my own. I could read, think, and not have a dog in the fight. 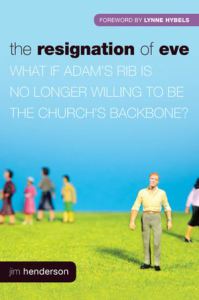 I believe all of the people he profiled would be categorized as evangelical, but I am sensitive enough to the nuances of ecclesiology to include the caveat that I might not know what I’m talking about.

I really enjoyed Jim Henderson’s anecdotal approach. He tells compelling stories of women and church, and categorizes them based on the subjects attitude toward the ways that their ministries were limited (or not) by their communities. Although he claims his inclination toward an egalitarian approach from the beginning, he doesn’t try to read the evidence to support himself. He includes quotes from bloggers and lots of stats, and he leaves the reader to make their own opinion.

This reminded me of Christian Smith’s Soul Searching, although I have always thought Smith was too gloom and doom, and too eager to draw sweeping conclusions from the people to whom he had spoken. Henderson wisely resisted any potential urge to explain the entire religious landscape based on his research (though, admittedly, his research is much less expansive than Smith’s).

Next time I am asked the question with which I opened this post, am I allowed to respond “It could be so much worse!!!” because that was my takeaway from this book. For all of the heat that the Catholic Church takes for it’s theology of ordination, I don’t think the naysayers realize how much easier it is for things to be so black and white.

Women cannot preside at sacraments. Women cannot be part of the formal governance of the Catholic Church. Other than that, go at it, girls. Of course, women are and were subject to whatever sexism existed in their day, but history shows us that in the grand scheme, participation in the life of the Church has allowed many women more influence and experience than they would have had otherwise. (Example: Hildegard and Catherine of Siena were free to NOT die in childbirth having their 17th sons at age 30).

So many of the stories in The Resignation of Eve were of women and men tying themselves in knots over interpretations of Scripture on what particular teaching and leading roles women should be allowed to have. Reading these theological contortions made me feel weary. It felt to me like people were using Scripture in an attempt to codify culture-wide, throw-back sexism. But people wouldn’t use the Bible like that, would they??? (that was sarcasm).

All in all, a readable, worthwhile book. I want to highlight one sentence, so impressive to me that I managed to remember the page it was on so I could go back and comment on it: I didn’t decide to follow Jesus in order to get to heaven, escape hell, or be holy or right. I accepted Jesus’ invitation to join his movement for one simple reason: Jesus is the freest person who ever lived, and I want to be free.