Jesus went up to Jerusalem. Now there is in Jerusalem at the Sheep Gate a pool called in Hebrew Bethesda, with five porticoes. In these lay a large number of ill, blind, lame, and crippled. One man was there who had been ill for thirty-eight years. When Jesus saw him lying there and knew that he had been ill for a long time, he said to him, “Do you want to be well?”- John 5: 1b-6

I have a pimple. Thanks be to God.

Everything about my outward appearance bears the marks of my Mediterranean heritage, including my skin. I had always had somewhat oily (don’t they call that “combination”?) skin with a tendency toward blemishes. It’s just part of who I am.

A few months ago, right around the week of the hives, I paid a trip to the dermatologist. They recently moved into a nicely renovated unit on the 8th floor of one of the city’s medical towers. I was so impressed that I took a picture when I got off of the elevator. 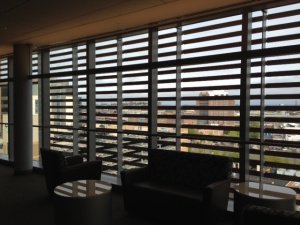 The woman who saw me that day we will call Joan, because of her remarkable resemblance to Joan Cusack. I explained to Joan that I had intermittent problems with rashes on my arms, and I was recently diagnosed with an autoimmune disorder so I wanted to check in about any possible correlation between the two and how to get the skin on my arms to calm the hell down.

Luckily for me, Joan is the kind of person who has aaaaaalllll the answers. “This has nothing to do with your Crohn’s disease!” she proclaimed, which I’m still not sure I believe. She went on to tell me that I “just need to get serious about moisturizing”. (But if that didn’t work I could use the prescriptions she offered, including one which can cause cancer, but she neglected to tell me that.)

At the end of my appointment, she casually gave me another piece of advice: not to wash my face. “Just rinse it with water, you don’t need soap.” She looked at my face for a second and reaffirmed “nah, you don’t need soap, the skin on your face is dry”.

Joan, I thought, don’t you dare. Don’t take this from me. In the past year I have watched everything I thought I knew about myself disappear. I went from identifying as healthy to numbering myself among the chronically ill while I was still stoned from the endoscopy sedative. I went from an autonomous single person to caring just as much about another person’s life as I do about my own. I overhauled how and where I spend my time. I questioned my call to making music. And now you want to tell me that I don’t have oily skin anymore?? I am going to jump out that 8th floor window and shatter all over Albany St, just like all the ways I define myself have shattered recently.HOW AM I SUPPOSED TO KNOW WHO I AM ANYMORE??

I didn’t say any of this, of course. “Um, not really, I just washed my face before I came”.

And then Joan sauntered out of the room, telling me how well-prepared I was and what a productive appointment we’d had by saying “It’s so great to meet with someone who knows what’s wrong with them!” You can’t make this stuff up.

She was right. When she saw me, my skin was dry. A few days ago I noticed the first pimple I’d had in weeks and my heart leaped for joy. My greasy skin is back. Alleluia, alleluia, alleluia.

I know that in every upheaval lies Jesus’ question: Do you want to be well? Do you want to grow through this? Will you accept my invitation to new life through whatever befalls you? I want to answer unequivocally yes but sometimes I’m bratty or scared or angry or confused and I scream “No I want my old life back!”, which I know is not the same thing as being well, or mature, or renewed.

Keep asking me, Lord. Keep inviting me. I promise that someday I’ll be brave. Someday I’ll be ready. Until then I pray Lord, make me new, but not yet.