I spent the better part of the last few weeks relaxing in a suburb-that-shall-not-be-named. The weather was temperate, I had very good company, I did yoga every day and grilled every night. It was dark and quiet when I slept and light poured in the windows when I woke.

It was heavenly. I cried when I drove back to the city. 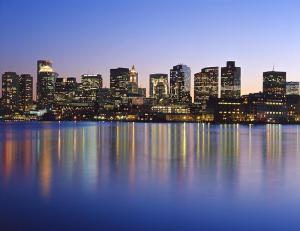 My first morning waking up back in Boston was pretty typical. A little light came in the tiny windows that are sparsely distributed throughout my “garden-level” apartment. It was enough to wake me, but not much more than the light of the street lamp that shines in all night long. I didn’t have a porch to drink my coffee on. I didn’t have good company. It was hot.

I hadn’t been to the store yet so I had to go out for my coffee. I chose not to go the repurpose-your-nightgown-as-a-dress route favored by a few elderly neighbors and put on shorts and a tshirt, although I doubt anyone in the neighborhood would have cared what I worn.

Cars lined the streets as people filed out of their triple-deckers and made their way off to work. I rounded the corner and admired the new, light-polluting sign out front of the funeral home (just what my neighborhood needs: more neon!). One of my buddies was getting something out of the trunk of a car in the driveway; I thought about asking him about the sign but decided not to bother him.

My girls were working at the coffee place that only takes cash and is best known for the coffee mixed with chocolate they serve in monster-size cups called “buckets”. I ordered my standard iced Snickerdoodle. They have mercifully shortened the name to “snick”, allowing me to save a bit of my pride when I order.

Shuffling back out onto the sidewalk I noticed the streets filling with cars and people (including one young man in a school uniform who was definitely going to be late for school). Some people were already preparing to walk over to the beaches in order to beat the heat. A city bus hummed by. Then another. I peered through the window of a favorite restaurant to see they had expanded and added more tables and stools.

It wasn’t until the second time I passed it that I noticed an empty storefront had a “closed” sign in the window. The seasonal ice cream shop had been closed for two years or so, but even when they were open they left their “Grand Opening!!” banner up year round. I instinctively looked for the banner, only to find a new sign, advertising frozen yogurt. My heart skipped a beat. Fro-yo within walking distance…does it get any better?

Still glowing, I approached my place. Coming toward me one of the scruffy older gentleman who makes the rounds during the day. We smiled and waved and made small talk about the weather.

For all of the quiet and beauty of the other places I have lived, nothing compares to the activity and the people in my adopted home. I’m sorry, Boston, that I doubted you while I was away. I can’t promise I’ll be yours forever but I definitely am yours for now. I may enjoy the ritzy Main Streets and exclusive beaches and the quiet – ah the quiet! – but in the end I love that dirty water.