Today will mark my first long drive during extreme heat in a car with air conditioning. Sure, the old Jeep had AC for a few months when I bought it, but by the time the first summer rolled around, that clunky, loud box-on-wheels had become a steam chamber (with a broken automatic window control, to boot).

Dang, I loved that car. 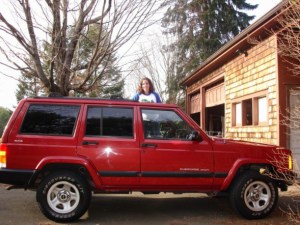 Now I drive a boring black SUV, three identical versions of which are on my tiny city street. But today I’m not ranting about how boring my car is. Today I am feeling guilty about having air conditioning.

I don’t always think guilt is such a bad thing. I should feel bad that there are people in the world who don’t have enough to get by. There’s also a part of me that clings to “person-who-does-without” as part of her identity. (See: I hate myself but I love my iPhone)

Good heavens, the writer thinks as she places her head in her hands. Why should air conditioning in the carbe such a source of angst? Why can’t you just (pardon the pun) chill?

It wasn’t until I was in my mid-twenties that I realized some people’s main goal in life was to be comfortable. That’s not to say they didn’t seek and achieve other accomplishments, but that at the end of the day, they were content to go home to a spacious air-conditioned house with a two-car garage and watch cable TV until they fell asleep on their big comfy couch.

THE HORROR. I still live in my crappy little apartment and tell myself it’s so I can save money. I don’t have cable. I don’t have a couch (I have a futon, so that’s something). I don’t have a parking space, nevermind a garage. I make sacrifices to live in a great city, but deep down I love the sacrifice, because I’m scared of what would happen if I surrendered to comfort.

What would I lose if I was too comfortable? How would my life change if I weren’t hungry anymore? Could I still strive if I had an easier lifestyle?

Will air conditioning make me soft?