I have to ask you to forgive me the pun, ever since I started working on my second masters degree seven long years ago, I have dreamed of making a joke about “serving two masters”. And today, the day after being handed another diploma, I can finally say it.

So now I hold advanced degrees in both music and theology, my two great loves. Not only have I immersed myself in the study of these disciplines, I have also found employment in them. In fact, I have been doing both of them my entire adult life.

When I was a senior in college I considered getting a degree in liturgical music and was accepted into a great program. But I was already doing some work at a very basic level in that field, and I didn’t want to spend two years learning how to do something I was already doing pretty well. What I needed to do was learn how to sing better. So I did.

I ditched the liturgical music program idea and I spent two years in a conservatory, which was culture shock to me, coming from the ivory tower of a liberal arts school. I met some of the most creative people I know, and a few folks along the way who were, shall we say, less interesting than the people I was used to. I learned what the music scene was like, how to hang with other singers and instrumentalists and how to build a career. I needed that time to learn about that world. And frankly, I needed it to learn how to be an excellent musician.

When I finished that degree I was able to get a job – ah, the halcyon days of 2005, when there were still jobs to be had by people with degrees in singing! I got a job doing ministry and religious education, because that’s what I’d done during my volunteer year, and part of what I’d studied as an undergrad. I had the opportunity to take some classes in ministry, so I did and they interested me. So I took some more, satisfying my love of learning, and (dare I say it?) of school.

I took the classes I wanted, did an internship, jumped through a few hoops (the most significant of which being a 30+-page synthesis on the Sacrament of Reconciliation) and now have another credential. It reflects an interest I already had and skills I had already been exercising, and prepares me for the jobs that I already have. 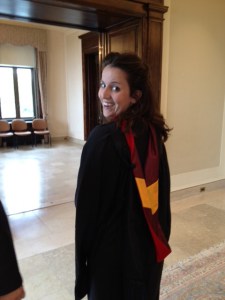 Because I have terrible pride, I have spent a lot of my life on a quest to be taken seriously, and I hate to be dismissed. I don’t think that’s why I pursued these degrees though: I really really love these two things.

And I want to do both. So I do, and it wears me out sometimes. I have been caught reading Rahner at sitz-probe and studying a score before a class on the French Revolution. People always expect me to have some grand way of melding the two disciplines. Sure, I sing and conduct at church, which is an important ministry for me. But I have yet to give much thought or attention to my “Spirituality of the Arts” or whatever you want to call it.

Yes, I often process my experiences as an artist by using the contents of my “spritual toolbox”, so to speak. And my life as an artist trying to create something beautiful has informed my theological understanding. But I haven’t discovered any desire to really bring the two together and rest there. I still want to do both, and to do them both well.

Rather than being two things that perfectly dovetail in me, music and theology are two passions that spring from the same source: my God-given interests and desire to make something beautiful for the Lord and the world. Sometimes I wish that I had a simpler heart that could be satisfied with just one thing, but for now I’m stuck with that blessed both/and, inspiring me, exhausting me, sustaining me.

What joys do you balance in your life?