I should start by saying I’m not a communist. For someone with an apartment, car, expensive education and closet full of blue dresses, that seems like a peculiar place to start. You’d think it would go without saying.

(Undoubtedly the first person to call me a communist was my father, in one of our many discussions during which I sided with my mother. My brother, alas, bore the brunt of it, not because of any extreme views but because “Tommy the Commie” sounds funny.)

Now that that’s settled, I must confess the frisson I felt when I read about the plan to “Occupy May 1st” today. Solidarity! Protests! Images of disembodied clenched fists!! I’m getting excited again just thinking about it. 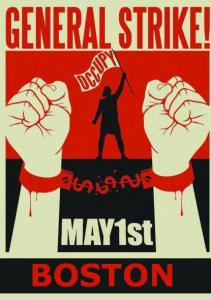 I won’t be striking today for sundry reasons, the strongest of which being that I work for an employer that values my work and compenates me justly. I’m not even sure I’ll make it to any rallies or marches, more’s the pity. But Occupy has gotten a bad rap lately, with encampments overstaying their welcome (New Haven being a recent example)  and the lack of a clear message. Maybe it’s not enough to simply say they want “change”, but it’s better than nothing.

You can read my love letter to a vision of a more just America. I still agree with the Occupiers that too few in this country control too much. And I think that most Americans don’t understand the magnitude of what this movemnt is trying to accomplish. They are going up against Bank of America and Newscorp. They’re going up against Disney for heaven’s sake. Who presumes to gaze upon the face of Mickey and live??

Corporations control money and the media and the message and I believe that could destroy us. Amassing capital simply cannot be the highest good in a society that calls itself moral – or in a culture that hopes to survive.

We have to organize our economy somehow. I’m not saying capitalism – or at least free enterprise – have to go out the window completely. But we have to stop allowing people of means to create a government and body of laws that keeps them on top and keeps others down.

So on this feast of St Joseph the Worker I’m not letting anyone call me a communist for being dissatisfied with the world as it is (even you, Dad), because my convictions come from a Catholic worldview. I believe in the dignity of work. I believe in the dignity of persons, not the personhood of corporations. I believe that the truth of Jesus Christ  – of liberation, service, and love – is what can set us free. I believe in the Reign of God, where justice and love prevail, not yet actualized but already stirring in the lives of those who hunger and thirst for justice. And I believe we have a responsibility to nudge that Reign into visibility when we can, all the while praying “Thy Will Be Done”.