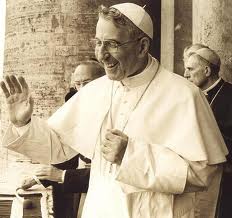 Poor, forgotten John Paul I,  il sorriso di Dio. The first time I googled “John Paul I”, it asked me “do you mean John Paul II”? It seems that the only folks who do remember him are the conspiracy theorists who insist his short papacy was ended by something other than natural causes.

I can’t say I know a lot about him, other than that he was smiling, positive, beloved, and that he spoke often of love. But I love an underdog, and I feel bad that he is overshadowed by the papal megastars who followed him.

In truth, I’m not much of a papist, and contrary to popular belief I don’t have to be. While respect for the pope and recognition of his authority as the successor of Peter and universal Pontiff are an element of Catholic faith, hero worship and treating each word as if they were Scripture is not. Still, I have my heroes – John XXIII being the greatest among them.

There is nothing more natural than being attracted to those who are similar to you, and there is nothing more healthy for the Church than to be led by a chain of Popes who are wildly different. I feel a great spiritual affinity for the Smiling Pope, the Smile of God. And I wanted you to know about him.

Who are your spiritual heroes?