Once upon a time there was a woman who loved to stay home. She knew that she should love adventure and sometimes she truly did, but most of the time she wanted access to the familiar, to sleep in her own bed, and to know where all the light switches were.

I inherited this homebody streak from a family member who shall remain nameless, and I also inherited the willpower to beat it when I know I should make an effort. That is why this morning I set out for Colorado for another “opera camp” experience like my trip to Novafeltria (documentation of which was the purpose for starting this blog in the first place).

That was two years ago, and it feels it. These past two years have been really transformative and maturing – but I didn’t start this post to talk about how old I feel. I’m still young enough to have been happy that my flight was out of Hartford this morning so my Mommy could drive me to the airport before dawn.

My enormous pink suitcase was overweight when I finally got to the front of the line (a line which I believe I saw an entire family cut – really?). I already had to pay a fee just to check the bag – and I’m not one to get all “airlines these days”, but I do find that a little annoying. The extra weight was going to result in another fee. They asked if I wanted to take out 7 pounds worth of stuff to get it under the limit. I looked at my already overstuffed shoulder bag I was carrying on, and I looked at the lock on the suitcase, and I thought of the cash back I get on my credit card and responded “No.” (Is that another sign of my age? My willingness to throw money at problems?) The clerk looked shocked. I said “It’s six in the morning, and I just want to get on the plane” as I handed over my Capital One card. 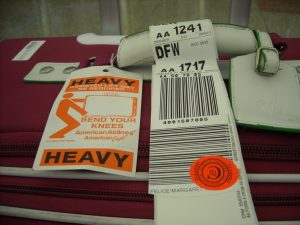 I had the dreaded middle seat on the flight to Dallas. The man on the aisle was very large, and I spent most of my time balancing myself so that I wouldn’t be in his space (which, of course, was my space). A screaming child was behind me and I battled through the early morning exhaustion only to land in the Central Time Zone – and then again in Mountain Time Zone – and have to battle through those same hours all over again.

A few folks on the 10 am flight from Dallas to Denver had brought their Chinese food on the plane. Another moment of ‘really?’ And I thought I was rude for having had an onion bagel in the terminal. The flight was uneventful (a few more screaming babies), and I landed in Denver about an hour before our rides were to pick us up.

I got pretty lucky with my car-mates on the four hour drive up to Steamboat. If there’s anything worse than spending two weeks at a program with people who irritate you, it’s spending four hours trapped in a car. The company was good, and we even enjoyed my family tradition of singing “On the Road Again”. Despite a little altitude uneasiness when we were up particularly high, by the time we got to Steamboat I felt fine (despite having been up since 2:30 Mountain Time and only having eaten a bagel).

Check-in, dinner, were all the usual blend of mildly awkward introductions and asking where the towels are kept, and then we got to the best part of the evening: rehearsal for an arias concert. As tough as it is to have to sing on such little rest, it is nice to get that first see-and-be-seen sing-off out of the way. We got a very kind speech about not being nervous, and I sat back and thought “I’m not nervous at all”. I don’t think I would have made it this long if I were still affected by other peoples’ opinions of my voice. In the end, I sang like I was dehydrated and had been up all night – which was pretty much true. But my high notes were nice.

To wrap up the day someone was generous enough to drive to the grocery, where I stocked up on hummus and fudgcicles, the two things that have sustained me most of the summer. We also passed a neon bunny that looks like it’s on drugs. 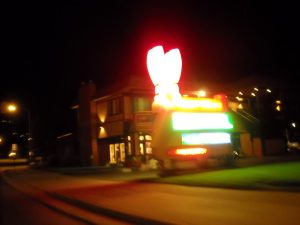 The picture didn’t’ really come out, but that might actually suit the mood.  Nearly 24 hours after my adventure anxiously began, I am at a picnic table under bright stars in the mountains, and it all seems perfectly normal.
When I went to bed last night and even when I woke up this morning I didn’t really want to go, what with all the uncertainty, meeting new people, unfamiliar beds and light-switch-placements. But I have trained myself to swallow my anxiety and just get on the plane. Inside me there is one person who loves adventure and one who loves consistency, and I’ve learned to let the two battle it out.
I hope to post once a day as I did in Italia due anni fa. I had the same hesitation about sharing my travel plans then as I do now, and I refer back to my warnings to potential thieves that I wrote in my very first post on this blog. I would also add that my upstairs neighbor sent me off with a promise not to let anyone touch my sh*t. So watch yourselves.