Bill Clinton finds limitless ways to draw attention to himself (crying? Really?), Rahm Emanuel may have been a little drunk, and Mark Warner puts a lot of faith in the success of the Chevy Volt.

I know Hillary was the big story last night, but I was excited to hear Deval Patrick. Even though he was in the hot spot between Warner and Clinton, the only station that ran his speech was the Fox network station, because they ran it live during the 10 pm news. I think that Patrick is an extraordinary speaker, although I have to wonder if he quoted Barney Frank on a dare. The first time I heard him speak live, he happened to be speaking with another “skinny guy with a funny name from Chicago” (his words). 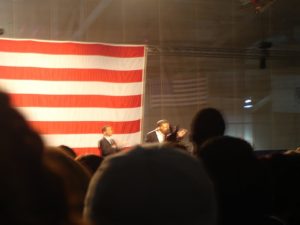 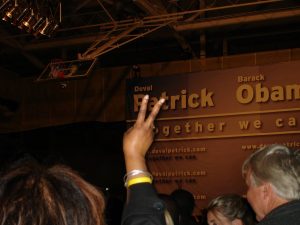 Not only did most of the networks (including PBS!) ditch Deval, CBS actually interviewed Mitt Romney during Patrick’s speech. Offensive!

I can’t help but remember the fun we had when the DNC was in Boston four years ago. We joked at the time that it was like Spring Break for Democrats. We were out late every night, scoping out famous wonks and trying to crash delegate parties and watching speeches at bars. Most of my friends have that peculiarly New England mentality that seems moderate around here but is phenomenally liberal to the rest of the country. Because I fancy myself open-minded I try to pretend I could at some point in a million years vote Republican, but for that one week I could get excited and say “screw it, I’m partisan!”

I think I’m having that week again.